Hon Kennedy Agyapong: I Will Rule In Style If I Was A President 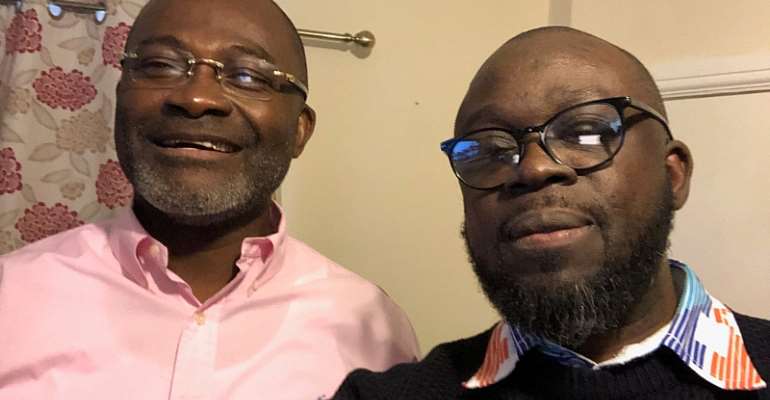 I couldn't pass on the opportunity to be part of the team to interview Hon Kennedy Agyapong –MP for Assin Central on Amansan FM in the UK when he was here to celebrate NPP Nottingham's four year anniversary. Sitting close to Hon Ken and knowing how animated he is in his interviews and discussions, I had to be conscious of the possibility of an accidental whack every now and then but thank God, we had a great and fun interview.

According to the Hon MP for Assin Central, Ghana would have been heading towards a Venezuelan style situation of governance characterized by weak economic fundamentals and general chaos, in simple terms Ghana would have been far worse if ex-President Mahama had won the last elections. Many Ghanaians support this assertion. He, however, cautioned that 2020 is not a done deal yet for the NPP.

On the question of whether Hon Ken will stand as an MP during the next elections, he responded that left to him alone he will not stand as an MP, a statement that will break the heart of many of his fans and followers as well as those in his constituency. He believes after 20 years in politics and turning 60 soon it may be time for others however, this does not mean he will not continue to support his party or others?

What was striking throughout the interview, which was streamed live on radio and Facebook, was Ken's easiness to talk to. For some MPs, subsequent calls to schedule interviews are not even returned. When asked to confirm rumors that he has a presidential ambition, Hon Ken made it clear that ''you don't need to be a president to effect change in people's lives, in my own small way whatever contribution I can do to help Ghanaians I will do it'. Hon Ken Agyapong went on to say that if he will be president he will 'rule in style' because he is very well traveled and has seen good examples of best practices which he will bring to Ghana. The Hon MP informed Amansan FM and our viewers that he can neither be bribed nor intimidated by anyone, and he is not afraid to go for only one term if he was president. He proclaimed ''I will change the system and before I make an appointment, I will check your history, which schools you attended and which jobs you have done and the kind of shirt you wear before making an appointment''. According to the MP people with careers and professions to fall back on after a political career make better politicians. He also highlighted that his appointments will not be by virtue of where you come from and questioned why should anyone be in his government if they cannot afford a decent shirt? Such people tend to amaze wealth in the hope that they will have something to fall on when they leave government and such very acts to mark the beginning of corruption he added.

Usually known and described as a radical and a loose talker by some, I find the MP intelligent and very knowledgeable, consumed with passion and the sense of getting it right. I believe this is where his general arguments and narratives on many issues including Anass and his videos emanates from, a deep logical, philosophical and a highly spiritual place.

Hon Ken's criticisms of Anass is as a result of what he believes to be the lack of credibility of the part of Anass. For him, it matters that Anass presents himself as a saint in exposing corrupt officials while he himself is corrupt? I asked if it mattered though as Anass's work is exposing corrupt officials in government for which he has won awards in doing Ghana well. Hon Ken's response indicates a trunk of evidence against Anass on corruption including blackmail.

On Manasseh Azure Awuni's recent video titled ''Militia at the heart of the nation'', Hon Ken made it clear that it is not true that the NPP has hired the leader or anyone to train people for any evil intention in Ghana, a so-called militia in the heart of the nation, however their presence in the castle annex is questionable if not known by some in the party or government, an error of judgment for which the party in government must admit. So far it appears the leader, one ''Choman'' has used his previous association with the president as part of the president's security team, to form what appears to be an employment agency, looking for employment for people and collecting a fee as much as Ghc 2000, even before placement is made in some cases.

The question of political vigilantism appeared to have energized Hon Ken even more. He rubbished what has been some NDC views on the invitation of the party by President to deal with vigilantism during the state of the nation's address rather than waiting for the Emile's Short Commission to complete its work and then making recommendations? Is it not the same NDC party who initially rubbished the commission and claimed they will not take part in its activities? It's not surprising that the NDC party has been tagged as evil by many.

The Hon MP was very clear that he will continue to support Delta Forces and Invincible Forces and will never be ungrateful to them for the good work they did in providing protection to many when the NPP was in opposition. He, however, agrees that if there is a call to stop vigilantism from all political divide he will support it.

In conclusion, Hon Kennedy Agyapong's interview draws much closer attention to the many issues in Ghana in particular ineffective systems, a dysfunctional public sector, and corruption. He is passionate and will change the system if he was a president. My key question, however, is this, should Ghanaians give the Hon MP a chance to become president? Can Hon Kennedy Agyapong really rule in style and change systems as he claims if he was a president? Time will tell.