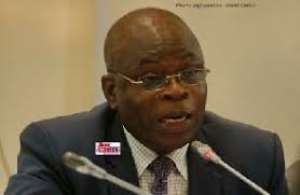 The Minority Caucus in Ghana’s parliament has said the recent investigative piece of Joy News which exposed nefarious activities of a criminal militia group allegedly aligned to the governing New Patriotic Party (NPP) at the former seat of government, Osu Castle “exposes the pretentious and deceptive character of President Akufo-Addo”.

Addressing the media following the exposé by Joy News’ investigative Journalist, Manesseh Azure Awuni, the deputy minority leader, James Klutse Avedzi, charged the Inspector General of Police to arrest all the young men caught in the documentary with alacrity.

“Apparently, whereas the president publicly engages in lofty rhetoric about the urgent need to disband political party militias, he is busily nurturing many more militias behind the scenes”, the statement adds.

The investigative piece revealed the existence of a pro-New Patriotic Party (NPP) criminal militia cabal that trains in a top government security facility, the Osu Castle.

Until 2013, the Osu Castle was the seat of government. Currently, it is an Annex to the Seat of Government, the Jubilee House.

The Minority in Parliament is therefore demanding the immediate resignation of President Nana Addo Dankwa Akufo-Addo over the Osu Castle Militia exposé arguing that he has lost every moral right to lead the country.

Below is the full statement by the Minority

The Minority in Ghana’s Parliament is grateful to you of the inky fraternity for honouring our invitation to cover this press conference at rather short notice. Though all objective minded Ghanaians acknowledge that we are not living in normal times, we wish to state for the record that we do not take your sacrifices lightly.

The Minority in Parliament just like the overwhelming majority of Ghanaians is totally shocked and full of indignation after watching a special undercover investigative report by Head of Joy News Investigative Desk, Manasseh Azure Awuni titled: “The Militia in the Heart of the Nation.”

The content of the undercover report which was aired last night is not only unsettling, it makes for grim commentary. Indeed, it shakes the very foundations of the notion that Ghana remains a stable democratic State. That façade appears to have been stripped bare.

Since the airing of “The Militia in the Heart of the Nation,” dark clouds now hang over our dear nation as many ponder deeply on the direction of our country under the duplicitous and deceptive leadership of President Nana Addo Dankwa Akufo-Addo.

Ghanaians are not oblivious of how similar militias in other countries mutated into full blown terrorist organizations that now haunt those nations and beyond including the politicians who birth them.

Manasseh’s report reveals how an NPP militia known as De-Eye Group operates and trains hundreds of its members at the Christianborg Castle in Osu.

Until 2013, the Christianborg Castle was the seat of Government serving as offices for the administrations of former Presidents Rawlings, Kufuor and Mills. Though the seat of Government has now moved from the Osu Castle to the Jubilee House, it is significant to point out that the Osu Castle is still considered a nerve centre for the functions of the executive arm of Government. This point is further buttressed by the fact that at least four Ministers of State at the Office of the President namely: Dr. Mustapha Hameed who is the Minister of State responsible for Inner City and Zongo Development, Hawa Koomson who is responsible for Special Development Initiatives, Professor Gyan Baffour who is responsible for Planning and Minister of State at the Presidency Rockson Bukari all function from the Castle.

Furthermore, the irony which must not be lost on us is that the Ayawaso West Wuogon by-election Commission of Enquiry which was established following the January 31st, 2019 bloody by-election and which is chaired by Justice Emile Short is conducting its public hearings from that same Osu Castle.

Ladies and Gentlemen, the Joy News’ undercover report unmasks the Commander of De-Eye Group militia as one Nana Wireko Addo, also known as “Choman.” An intriguing fact is that Joy News has confirmed that the said Commander is a former personal bodyguard of President Akufo-Addo. This appears consistent with the narrative of how other bodyguards of Vice President Bawumia, National Organizer Sammy Awuku and other senior NPP functionaries who have been identified as leaders of other party militias.

Perhaps even more mind-blowing is the revelation that De-Eye Group militia has been allocated two offices at the Castle where it uses one as a secretariat and the other as an office for Commander Nana Wireko Addo. For a Government that is yet to provide complete office accommodation for all of its elephant-sized 111 Ministers – the De-Eye Group Militia must be a very special organization dear to the hearts of those who matter at the very top echelons.

The investigative report brings to the fore the inner workings of the militia and how well connected they are to party bigwigs including President Akufo-Addo himself. In a military ops style, divisions within the militia are Alpha, Charley, Delta and the Special Unit.

The scary revelations also show how some persons within the National Security Ministry such as the Operations Director, Col. Michael Opoku of the infamous “Azugulicious” deployment in the bloody Ayawaso West Wuogon operation were rendered powerless when they tried to stop the militia from operating at the Osu Castle including using the once ceremonial and stately Osu Gardens for training drills. The militia’s commander “Choman” is also captured on tape bragging about how they have defeated those National Security infiltrators who tried to work against the militia’s progress.

Ladies and Gentlemen, this special Joy News’ investigative report has exposed the pretentious and deceptive character of President Akufo-Addo. Apparently, whereas President Akufo-Addo publicly engages in lofty rhetoric about the urgent need to disband political party militias, he is busily nurturing many more militias behind the scenes. A clear case of preaching virtue and practicing vice.

President Akufo-Addo has so far shown that apart from class acts which easily makes him a candidate for an Oscar, there is no sincerity and genuineness on his part to uproot the menace of party militias. On the contrary, it has now emerged that President Akufo-Addo is himself a War Lord as Prof. Henrietta Mensah Bonsu has appropriately advised on how to describe persons who sponsor and house party militias.

Despite President Akufo-Addo’s infamous “All-Die-Be-Die” statement and warnings from some of his bosom friends who knew him well as epitomized by veteran journalist, Mr. kofi Koomson who prophesized about a decade ago that Ghana would not be safe under an Akufo-Addo Presidency and that he, Kofi Koomson knowing what he knows would not be able to sleep with his eyes closed; many were those who thought a rebranded Nana Akufo-Addo would depart from those tendencies his close friends were frightened about but alas we were all mistaken.

Ladies and Gentlemen, Having carefully considered the gravity of the matters in issue, the Minority hereby makes the following demands:

1) We insist that Nana Addo Dankwa Akufo-Addo must resign as President of the Republic with immediate effect. The President has lost every moral authority to continue to occupy that high office after having been caught “In flagrante delicto.”

2) We call on the Inspector General of Police to immediately, that’s before close of day, carry out a swoop and arrest the leaders and members of De-Eye Group militia. It is obvious that the group has flagrantly violated numerous laws including but not limited to Articles 85, 200 (2) and 210 (2) of the Constitution of Ghana and Police Service Act, 1970 (Act 350).

3) That an investigation be opened into how a facility owned and managed by the State - the Osu Castle became a safe haven for an NPP militia.

4) That the State should take urgent steps to reclaim the offices and other State properties in the possession of the leaders of De-Eye Group Militia as a matter of prime importance.

5) That Government should immediately discontinue the training of NPP militia groups in facilities owned by the State across the country.

6) That Civil Society Groups and Faith-Based Organizations should now assume a prominent facilitation role in the proposed talks to disband all party militias seeing that Government can no longer be trusted as an inculpable party.

The Minority decries the creeping culture of intolerance and vicious attacks perpetrated by officials and agents of the Government on innocent journalists whose only crime is that they are pursuing their profession without fear or favour. We condemn this negative culture which Anas Aremeyaw Anas has been subjected to in recent days and caution that Manasseh Azure Awuni should not be made to suffer the same predicament following this world-class courageous and impressive undercover reportage. These are journalists who at the very least, deserve high praise and not character assassination and mudslinging from a lynch mob of enslaved party loyalists.

In conclusion, the Minority wishes to serve notice that if all our demands are not met in the shortest possible time, we shall avail ourselves to other constitutional avenues to achieve our noble objectives in the national interest.

God save our motherland.

Thank you very much for your attention. We shall now respond to your questions.

Stop tarnishing my image, I have never been deported from US...
2 minutes ago

The boo is the truest voice of the people; not the selfish c...
12 minutes ago