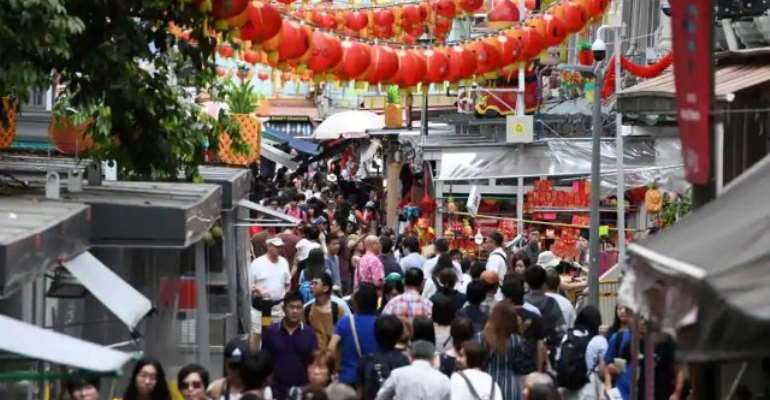 People walk along a crowded alleyway past stalls selling gifts and decorative items in the Chinatown district of Singapore on February 19, 2018. Singapore unveiled its 2018 budget on February 19, with economists predicting the city-state raising its goods

All Singapore citizens aged 21 and above will get a one-off “SG Bonus” of up to S$300 each as the 2017 budget came in with a surplus of almost S$10 billion (US $7.6 billion), the city-state’s finance minister announced on Monday.

Finance minister Heng Swee Keat made the announcement during his budget speech in Parliament, describing the bonus as a “hongbao”, the Mandarin word for a monetary gift given on special occasions.

He said this “reflects the government’s long-standing commitment to share of the fruits of Singapore’s development with Singaporeans”, according to Channel News Asia.

The bonus will be paid according to people’s assessable income. About 2.7 million people will get the payouts, which are due by the end of 2018.

Singapore’s revised budget for fiscal 2017 showed a surplus of S$9.61 billion, thanks to contributions from statutory boards and higher-than-expected stamp duty.

The surplus will also be used in other ways. Heng said S$5 billion will be set aside for the Rail Infrastructure Fund to save up for new railway lines that Singapore is building.

Another S$2 billion will be set aside for premium subsidies and other forms of support for Eldershield, an insurance scheme that helps senior citizens with severe disabilities to cope with the financial demands of their daily care.