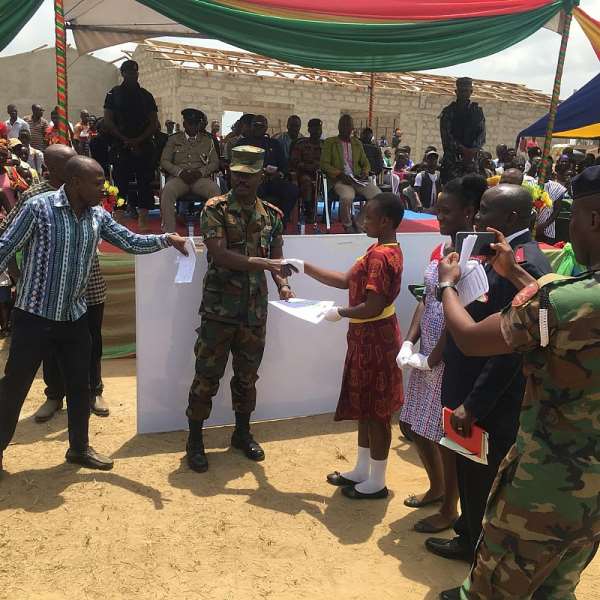 The Asene Manso Akroso District Assembly will from next year institute scholarship scheme to arrest the downward trend in educational performance in its District.

The call was made by the District Chief Executive (DCE), Mr. Alex Nkoom during the District turn of the 62nd Independence Day Celebration at Akyem-Manso in the Eastern region.

Mr. Nkoom, however, entreated the Educational Directorate and students to cooperate with the District Assembly to ensure successful implementation of the initiative.

Touching on indiscipline among students in these recent times, the DCE advised students to desist from all manner of social vices and devote more of their precious time on books. This he said is the surest way to achieve excellence in whatever they do in life.

“My dear students and pupils, you are the future leaders of this country and without discipline and hard work, you cannot achieve success”, he said.

Commenting on some successes chalked by the one-year-old Assembly, the DCE enumerated the following projects such as, the completion of two 6-unit classroom block at Manso R/C Primary and Ahyiem Zion Primary schools, the rehabilitation of maternity and laboratory block at Akroso Health Centre and supply of 200 street bulbs to some selected communities in the District.

The rest were, the reshaping of the Akroso-Mante feeder road, Akroso Yaw-Donkor feeder road and some Manso town roads as well as an extension of electricity to some 34 selected communities among others.

According to him, the provision of these facilities were to facilitate teaching and learning in schools as well as improving health care delivery and living standard for the people in the District.

In all 930 students and pupils from 31 selected schools across the District participated in the match past. They included 450 from 15 Primary schools, 420 from 14 Junior High Schools, and 60 from 2 Senior High Schools respectively.

Certificates and other award prizes were awarded to distinguish and deserving schools who excel in the match past, with the Asene, Arthur Primary being adjudged the overall best school in the Primary category while the Asene, Salvation Army Junior High School took that of the Junior High School category.

For their prizes, each category took home a certificate, wall-clock, a waste-bin to encourage proper storage and collection of solid waste and specially-designed bucket stand and bowl into which beneficiaries could wash their hands to prevent the outbreak of diseases.