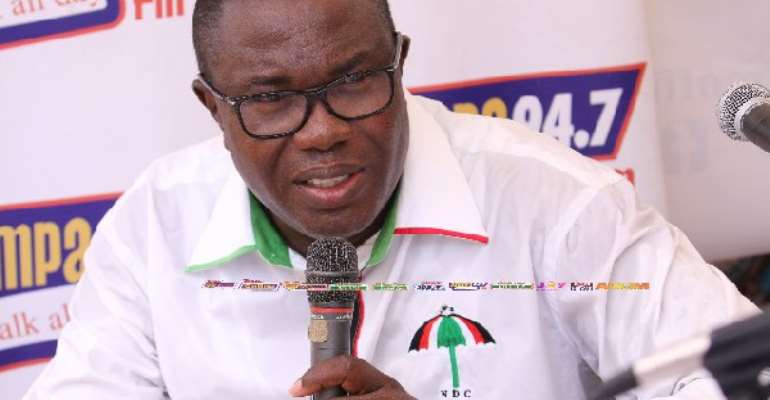 A group calling itself, Critical Thinkers International (CTI) is asking the security agencies to deal ruthlessly with the National Chairman of the opposition National Democratic Congress (NDC) Ofosu Ampofo for allegedly plotting evil against the ruling government.

A leaked tape purported to be the voice of Mr. Ofosu-Ampofo in a meeting with party communicators said, “we’re going to take her [EC boss] to the cleaners.”

“As for the EC chair, we must wage a relentless war on this EC chair. Me, she doesn’t want to see my face,” Ofosu-Ampofo allegedly said in a leaked voice while speaking some members of the party after the Ayawaso West Wuogon by-election.

Ofosu-Ampofo, as part of strategic communication plans for the NDC going into the 2020 elections, unleashed his party’s communication ‘dogs’ to verbally attack the Peace Council Chairman Professor Emmanuel Asante.

“For the first time, I will endorse insulting the National Peace Council Chair,” he said in the leaked video to the cheers of party communicators.

"...You have Chief Azorka in my meeting saying, Chief thank you, I said why he said if you had not taken this decision I don’t know how my men would have gone back to Tamale. The issue is that they had brought down the Kandahar Boys and the Kandahar boys know our boys from Tamale. You know it was a targeted attack and so once they spot you they invite them, and then around that time my people were so defenseless and they had packed themselves in pickups so cordon off and hounding them was very very easy and they had not anticipated all these things coming so it hasn’t been easy but for me how we take the battle from here is most critical.

But in a statement signed by the group's member, Nana Kwadwo Akwaa, he said per his analysis of the voices Ofosu Ampofo, it can be assumed and authenticated to be a hatched agenda by the NDC to plunge Ghana into chaos.

He noted that the budded motive of former President John Mahama is geared toward disrupting the democracy and governance of the country seeking to attack members of the ruling NPP government, religious leaders, civil society organizations' (CSO) leaders, the Electoral Commission (EC) chair, personnel of the state security institutions, the respective family members of their targeted people all in an attempt to disrupt election 2020.

"I will therefore advise for the arrest of Elder Ofosu Ampofo, former President John Dramani Mahama, and others who were present during the meeting, for investigations and prosecution", he pleaded.

Below is the full statement:
ARREST MAHAMA'S ALLY FOR HIS TREASONABLE MOTIVE AGAINST GHANA

I have chanced upon some audios which have been purported to have emanated from the camp of the national leadership of the National Democratic Congress (NDC). These audios have been confirmed to be the words of the NDC National Chairman, Elder Ofosu Ampofo, of which he also confirmed in those tapes that those statements of his have had the endorsement of the current flagbearer of the NDC, former President John Dramani Mahama.

Per my analysis of the leaked tapes of the voices of this associate of John Mahama, Elder Ofosu Ampofo, it can be assumed, and also authenticated to be a hatched agenda by the NDC to plunge Ghana into a state of chaos, and through that grip the country in a state of fear from now till the 2020 general elections. The budded motive per the words of this surrogate of former President John Mahama is geared toward disrupting the democracy and governance of the country through the attack of the First Gentleman of the land, their political opponents, religious leaders, civil society organizations' (CSO) leaders, the Electoral Commission (EC) chair, personnel of the state security institutions, the respective family members of their targeted people, and also disruption of elections and orchestration of other violent activities. And they intend to execute this agenda through kidnappings, life threats, killings, torture, maiming and other violent means.

Aside these plans being criminal offenses against their targeted people, it is also treasonous due to their intended objective to disrupt the democracy of the country. I will therefore advise for the arrest of Elder Ofosu Ampofo, former President John Dramani Mahama, and others who were present during the meeting, for investigations and prosecution.

Brazil's president contracts virus as US starts WHO withdraw...
42 minutes ago