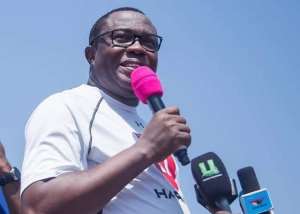 The under fire Chairman of the National Democratic Congress, Samuel Ofosu Ampofo has finally spoken about his alleged explosive leaked tape.

He denied any wrongdoing on the tape saga, saying “Less than three months ago”, “You elected me as the Chairman of the party.”

According to him, “now the NPP has organised a press conference asking me to resign. I want to assure you that I am a man of peace, and my hands are clean. I have been in politics for many years, there's no evidence I have won my victory through violence or spoken against anybody. I want to remain focused, the NDC wants to remain focused. We will win the election freely, fairly and clearly.”

He noted that “I want to assure you that the NDC Chairman has not run away from anybody. When we finish thanking God on Sunday, on Monday, our lawyers have informed the CID that the National Chairman of the NDC will come to the CID headquarters to answer any questions that they want.”

He added that “by eight O'clock, we are there and, so, I want to assure them that the peaceful Chairman, the peaceful party will respond to their call even though they first invited us through WhatsApp”.