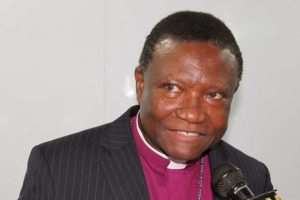 The Chairman of the National Peace Council, Rev. Emmanuel Asante says he does not hold any grudges against beleaguered National Chairman of the opposition National Democratic Congress (NDC), Samuel Ofosu Ampofo for allegedly making defamatory comments against him.

According to the vociferous man of God, no amount of insults will deter him from promoting peace in Ghana.

Mr. Ofosu Ampofo in viral leaked audio is heard outlining plans to match up against groups from the governing New Patriotic Party ahead of the 2020 elections.

In the same tape, he is heard telling the audience believed to be executives of the party to attack the Chairperson of the Electoral Commission, Jean Mensa and the Peace Council Chairman, Professor Emmanuel Asante.

But, speaking on Ekosii Sen on Asempa FM on Friday, Rev. Asante said he had forgiven Mr. Ampofo or any other person for who might have made those comments against him.

“That’s not going to stop the Peace Council from doing its work. My conscience is clear; I will do what is expected of me. I will be neutral. We’ve done it in the past and we will continue doing what we have to do. I’ve already forgiven who ever said that. If he [Samuel Ofosu Ampofo] said that I’ve forgiven him. If it’s not him, I still have forgiven whoever made those words.”

A cross-section of Ghanaians has heavily criticized the NDC National Chairman with many demanding for his immediate arrest.

His party, however, claims its offices have been bugged following the circulation of recordings and accused the government of engaging in illegal espionage.

The National Communications Officer of the NDC, Sammy Gyamfi said: “we know the government is engaged in illegal espionage activities in this country; employing state resources and the national security apparatus to spy on political opponents.”

Ofosu Ampofo yet to honour CID invitation over leaked tape

Samuel Ofosu Ampofo is yet to honour an invitation by the Criminal Investigations Department (CID) of the Police Service, more than 24 hours after the agency invited him.

The party's Communication Officer, Sammy Gyamfi said although the national chairman has not been to the CID headquarters, he is cooperating with the police.

According to him, Samuel Ofosu Ampofo is being represented by his lawyers who are engaging with the CID to agree on an appropriate date for his meeting with the officials.