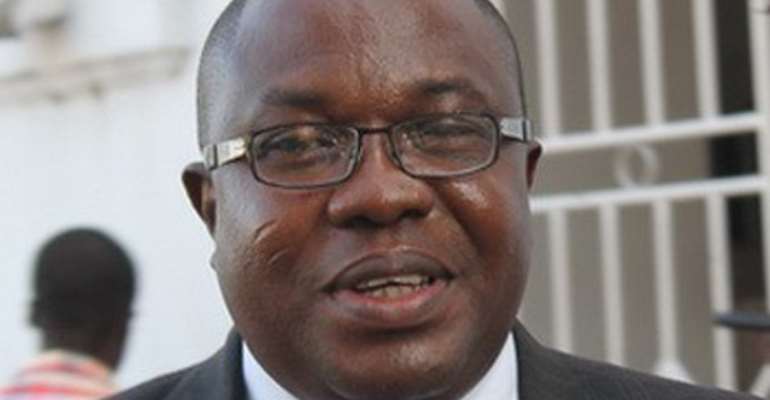 The audio recording contains matters bordering on national security which the CID is obviously interested in.

A February 27, 2019 correspondence signed by Assistant Commissioner of Police (ACP) George Tweneboah, deputy director of the CID, was directed to Mr Ampofo, requesting him to report at 10am to the law enforcement agency.

The initial reaction by the police when they received a copy of the 'toxic' audio was to invite the chairman by phone but he refused to answer the call, a source told DAILY GUIDE.

He was not at his Spintex Road, Accra residence, when a team believed to be led by a superintendent went to serve him with the invitation.

Interestingly, a source said when the team told his security man at the gate to deliver the letter to his boss, Mr. Ampofo allegedly ordered his gatekeeper on the telephone not to collect the letter, insisting that they take the letter to the party headquarters.

At the party headquarters, the police source said Mr. Ampofo was not in the office and nobody was ready to receive the letter on his behalf.

Some of the personnel were left behind to wait for Mr. Ampofo while the rest returned to inform their boss about the outcome.

At the CID headquarters, the sources said a scanned copy of the letter was personally sent to Mr. Ampofo through his WhatsApp line around 5:00pm but surprisingly within 30 minutes, the letter went viral on social media and the mainstream media started discussing it.

At about 12:30pm yesterday, lawyers from Ayine & Felli Law Chambers represented by Victor Kojogah Adawuda and Abraham Amaliba went to the CID headquarters on behalf of Mr. Ampofo.

They were hosted by the Deputy Director of CID behind closed doors for close to an hour.

Briefing the media after the meeting, Abraham Amaliba said they came to the CID headquarters to confirm if the letter of invitation circulating on social media was 'authentic'.

He said since the letter has been confirmed to be coming from the CID, they were going to meet their client on the way forward but could not confirm if Mr. Ampofo would be able to report to the police the same day.

However, sources have hinted that Mr. Ampofo was spotted at the one-week funeral observance of the late Lee Ocran, a former Education Minister in the NDC administration, who passed away recently.

ACP George Tweneboah, the Deputy Director of CID, later confirmed to DAILY GUIDE that since their lawyers had reported to find out the authenticity of the letter, they would wait for Mr. Ampofo to report 'personally'.

“His lawyers have reported but we are still waiting for him to report and if he fails, we would have no option than use the legal processes,” he added.

The leaked take has expectedly stoked fire in the opposition NDC and generally changed the political conversation in the country.

Various theories were put out to remove the sting from the recording as it swept across the political plain like wildfire.

With the initial responses pointing at a mole within the party failing to help the cause of the party, it did however indicate that some members at the executive level are regarded with suspicion.

A situation where the party managers are not singing from the same hymn book obviously suggests a political grouping in disarray occasioned by the leaked tape.

So even as the police await the arrival of the National Chairman at the CID headquarters, the party members are hunting for the source of the leakage.

Sammy Gyamfi, National Communications Officer of the NDC, in his reaction, said “the NDC states for the record that the statements and attributions contained on the said tape are concocted and false. They are inconsistent with the character and track record of Chairman Ofosu Ampofo and do not reflect the values he has always stood for.”

He ended up by saying that 80% of what was contained on the tape was 'doctored.'

Perhaps the most glaring evidence about the extent of crisis the leaked tape has evoked in the party is the remarks by Bernard Allotey Jacobs, one of the pillars of the party in the Central Region, who alluded to the crisis.

He said: “After listening to the tape, I realised that Charlie, let's play politics, and that is pure politics, it's not about his character… sometimes we need to defend him because it's politics, it's absolutely politics.”

He said: “We the party (NDC communication) members are very happy with what our chairman has said and we will do exactly that. What he said is dear to our hearts and that is why we clapped for him during the meeting which was recorded and leaked.”

On his part, Chief Biney, Deputy National Organiser, said: “The NPP has devised ways to bug us. So, they have cut the voices and pieced them together to favour what they want to achieve. It's true that there is a tape hovering in the air but the utterances are pure fabrication to achieve a goal . . . They have doctored it because they want to achieve something.”

Covid-19: Breaking Safety Protocols Should Be Our Last Mista...
12 minutes ago