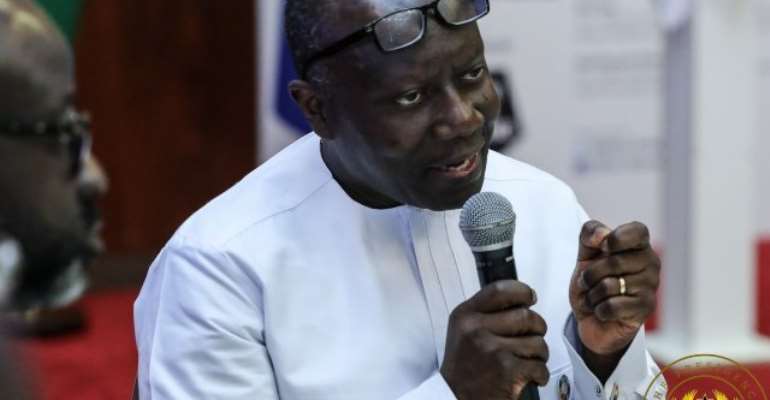 Official records show at least 200 million cedis have been locked up in Menzgold, an investment firm now dismissed as a Ponzi scheme. The Finance minister Ken Ofori-Atta revealed this during a durbar with army officers in which the President, Nana Akufo-Addo, was present.

The information, which was in response to a question, reveals for the first time the extent of loss Menzgold customers have been exposed to after an undisclosed number of them bought into their business pitch of paying 7% to 10% returns on special gold collectibles bought and deposited with the company.

The question from an army officer also opens the lid on the level of involvement of security officers in the business that is believed to have attracted a wide spectrum of Ghanaians including religious leaders.

Menzgold CEO Nana Appiah Mensah is currently at a prison in Dubai.

Already 53 soldiers, in January 2019, have sued Menzgold Ghana Limited, for failing to pay back ¢2.5 million in investments.

The company began crumbling in September 2019 after the Securities and Exchange Commission ordered it to shut down its “gold” dealership operations.

The CEO of Menzgold Nana Appiah Mensah absconded to United Arab Emirates but has been arrested by Dubai authorities and is standing trial for a business gone bad.

The Finance Minister, who has called some Menzgold clients greedy, indicated government is liquidating assets belonging to Nana Appiah Mensah to pay off clients.

The President, Nana Akufo-Addo, at the durbar, repeated his advice to Ghanaians to be cautious when investing in companies especially when regulators had warned against doing so as was the case of Menzgold.

This is the second day in a row the President has spoken to the Menzgold issue after a long silence. He broke this silence Thursday during his presentation of the State of the Nation Address in Parliament.

While he delivered his address, Menzgold clients had picketed at Parliament as they continued their sustained strategy of demonstrations.