State Of The Nation Address (SONA), The Whites And Blacks Clothing It 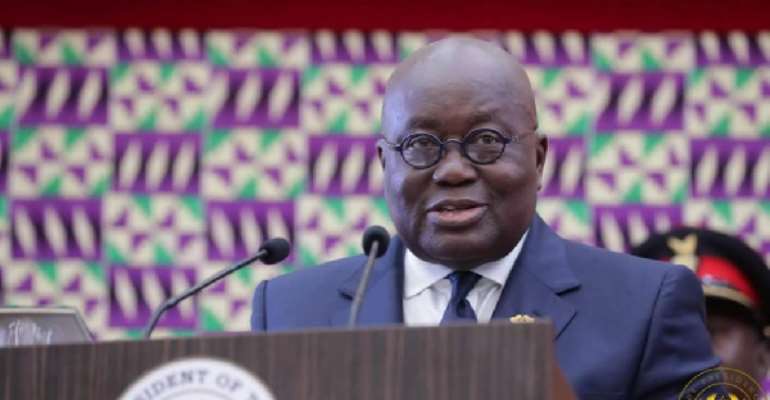 The President in accordance with article 67 of the 1992 constitution of Ghana exercised his constitutional mandate by gorgeously appearing in parliament to deliver to the house what government has done and what it plans to do in running the affairs of the country. The President was vocal in sending his message to all Ghanaians and the international community as many concerned citizens glued their eyes and ears to various television and radio stations across the country watching and listening for an hour and half. The posture and affirmations showed by the President while delivering this valuable message eulogized his fervent oral desire to see a Ghana beyond envisioned. The message met no friction of noise and over cheers from any of the side of parliament, beating the anticipation of many who expected placards and distractions from especially the minority side of parliament. It was not a surprise turn to me because the message delivered was read in the face of the country before its delivery.

As a concerned citizen who wishes to be opportune as the President has got and hope to lead talks with actions, I put to you the political intelligence this SONA has crowned itself. This SONA as delivered in my perspective was a daily show talk. The President on education appealed poverty should not be a barrier to education in the country and the intention of the government to change the current educational curriculum, making senior high school education as part of basic education. It sounds cool in the face of those who accept challenges as norms which are problematic to experts. To add second cycle education to basic education, the curriculum will be shortened by a number of years and the impact level could be minimal. Previously and now, basic education serves as the point where the child is taught basic things that give them access to secondary education. Basic education is the foundation of the child as such combination with secondary education will bring no elevation to the second cycle school certificate. Government is doing all things possible to sustain the hastily introduced killer free senior high school policy which has caused more stressed to students, parents, teachers and even the educational management. The reference is the current basic school system we have where there is no effective teaching and monitoring.

Education is key to all other sectors of the economy as such government gets to be careful the approaches it brings onboard upon being challenged with the Free Senior High School education policy.

The President was careful when he got to TVET education. He said the time has come for us to stop talking about improving TVETS and act which instead resonated his words of one of his SONAs. Since the inception of Mr. President and his government, there has been no input in the TVET education in the country. The various facilities that were under construction are halted and now we are hearing ultramodern facilities. It would not wet mouths if the government fails to meet the timelines as loudly delivered to all and sundry.

It became a welcoming news to hear the President clearly standing to draw obstacles that will stop the activities of political vigilantism experienced quit heavily in the country for the past years and now. His call on leaders of all political parties to surrender their party security groups is laudable hence the credit belongs to his idea. I however have an emotional feeling over his call since he may fall into the same pit he has dug when he finds himself on other side of the political domain. In opposition, these vigilante groups did the dirty works to give you such an honorable status today, but your reared hawks are eating your fowls, causing mayhem in brought day light. The NDC will far be ready to join hands in battling the canker of political terrorism since its security groups were because of the emerging forces used by the NPP especially in the 2016 general elections. The disappointing aspect on security as laid by the President is his failure to recognize the redundancy the Ministry of Interior and Ministry of National Security are playing. The President also neglected the fact that government is hatching and covering criminals under the care of the Minister of national security but rather hailed the Short commission which surely will break the hearts of Ghanaians after its findings since two big institutions, the Electoral Commission and Ministry of National Security masterminded the mess that called for the formation of the Short commission.

On health, the number one gentleman made pronouncements of clearings for the employment of a huge number of graduates into various health facilities which contradicts the daily demonstrations pioneered by unemployed nurses. It is quite strange that the SONA called Ghanaians as people that accept theories without practical application. The 275 ambulances that are set to be procured and sent to all 275 constituencies in Ghana should not be danced too since it is yet to be done.

On overall assessment of the SONA, the President did well by honoring his constitutional mandate but failed to touch the hearts of the citizenry when fractures of the economy were hidden form the hearing and vision of the people. The cedi now is valueless in the face of the US dollar and maybe the IGP lost the key to the US military base yet to be established in the country. Agriculture was completely lost in the SONA which is a signage of failure of the flagship program ‘planting for food, jobs and exportation.’

Ghana deserves better than this hence the time to walk the talk by building a strong economy through physical infrastructural development, proper educational system coupled with modern agriculture to feed us with shelter, to feed our brains and to feed our bodies.