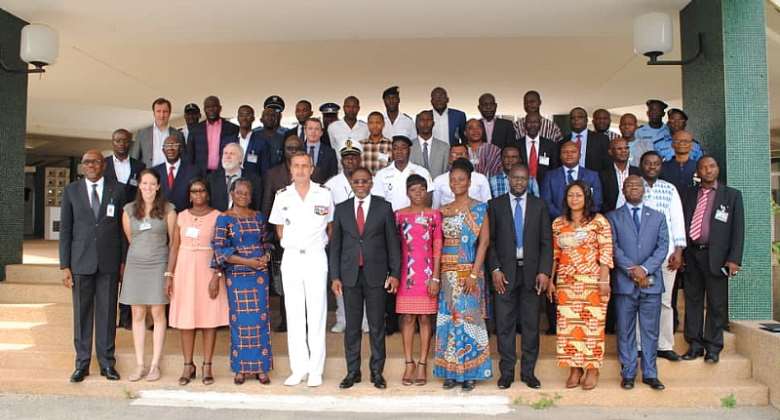 The participants in a group photograph

The Interregional Institute for Maritime Security (ISMI) has deepened the capacity of fishery officers to fight against Illegal, Unreported and Unregulated (IUU) fishing in the Gulf of Guinea.

About 30 officers took part in a 5day training at the Regional Academy of Marine Science and Technology (ARSTM) in Yopougon, Abidjan financed by the French cooperation via the Directorate of Security and Defense Cooperation (DCSD), and supported by the Republic of Côte d'Ivoire from 18th to 22nd February, 2019.

The participants were drawn from 13 countries such as Benin, Togo, Nigeria, Sierra Leone, Liberia, Ghana, Guinea Bissau, Guinea Conakry, Gabon, Congo, Senegal, Côte d'Ivoire and the Democratic Republic of Congo to adopt best strategies to clampdown on the activities of pirates on their territorial waters.

Speaking at the opening ceremony in Abidjan, Mr. Abroulaye Fofana, the Permanent Secretary of the Interdepartmental Committee Responsible for Sea Action express deep worry about the direct impact of illegal fishing on the lives of the people.

He expresses confidence that the training program will yield meaningful results, in terms of capacity building for the benefit of the Gulf of Guinea states and all structures within the Yaoundé security architecture.

Mr. Abroulaye Fofana commended ISMI initiatives which began in 2018 that seeks to address the major developmental challenges in the countries along the Gulf of Guinea.

The Director-General of ARSTM, Colonel Karim Coulibaly noted the consequences of maritime crime in the Gulf of Guinea.

According to him, the attack on the maritime sector and port which undoubtedly constitutes the lifeblood of economies along the Gulf of Guinea.

“The pirates have decided to sacrifice the efforts of development of our States on the altar of their selfish interests,” he intimated.

Mr. Colonel Karim Coulibaly stated that IUU fishing is not limited to illegal fishing but a complex interweaving of organs and actions ranging from freight to the sale and distribution of fish and fish products.

In the same vein the Permanent Secretary of the Interministerial Sea Action Committee, Mr. Abroulaye Fofana and Colonel Karim Coulibaly, Director General of ARSTM, have expressed appreciation to the Ambassador of France in Côte d'Ivoire and other partners who support the initiative to stir the tide.