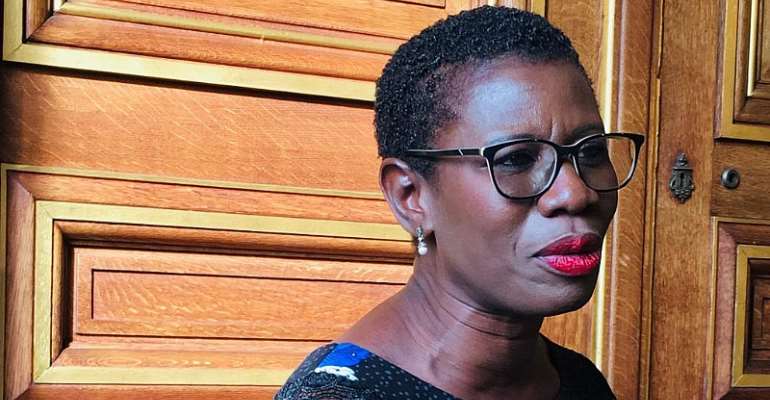 After nearly a year in office, Yvonne Aki-Sawyerr, the mayor of Freetown, the capital of Sierra Leone, is not tired yet. A veteran of handling the Ebola crisis that ravaged the country, Aki-Sawyerr is on a path to revitalise the city, teeming with two million people and growing at 4.2 percent per year.

“That translates directly to pressure on the environment… there's indiscriminate cutting down of trees on our mountainsides, there's destruction of the mangroves as the coastlines are banked – all of this to create informal dwellings, informal housing,” says Aki-Sawyerr.

“In addressing the challenges of the city, we need to reverse that,” she told RFI on the sidelines of the Climate4Women conference hosted in Paris by her counterpart Anne Hidalgo.

Freetown is perched on sloping hills, overlooking the Atlantic Ocean. Its role as an economic driver has spurred significant urbanisation since independence in 1961.

But a growing population and lack of enforcement of zoning laws, deforestation and annual average rainfall of 3,600 litres per square metre , have exacerbated flooding and landslides.

More than 1,141 people died during the August 2017 mudslide, a disaster that she is trying to prevent from reoccurring in the future.

Aki-Sawyerr has an agenda focused on housing, urban planning, environmental management and sanitation to improve the lives of Freetownians and has tried to include the residents themselves in making the city greener and safer from environmental disasters.

“In Kroo Bay, what was the specific issue? When you got the community to come talk with you, it was a bridge that was broken,” says Aki-Sawyerr, referring to the informal settlement on the edge of the bay, a place known for being flooded every year.

“It had been there for years, and because of the concrete, the metal rods, it had acted as a dam in the rainy season. So we moved it, and the flooding stopped,” she says – a simple solution after speaking to the community.

Communication plays a key role in Aki-Sawyerr's plans, something she is comfortable with and enthusiastic about, in a country where party politics are crucial to survival. She has made strides as a mayor from the opposition All Party Congress (APC) party, while working with President Julius Maada Bio, head of the ruling Sierra Leone People's Party (SLPP).

“I focus on what matters – to improve the lives of the people. It's always been to transform Freetown,” she says, adding that she is open to collaborative efforts, and so is the current government.

Working together to serve the people

“Whether you're central government from a different party, or you're Freetown City Council from the APC, at the end of the day, we're in office to serve the people of Sierra Leone, and in my case, the people of Freetown. I think it's worked because that's been the focus,” she says.

Revitalising the capital is not about remaking it from scratch, either. Aki-Sawyerr is looking into a zoning plan that was done for Freetown in 2014 but never adopted. It needs to be reviewed and revised because of the ongoing population growth, she says, “but there is still a basis that we can work with. The plan is to work with the central government.”

She credits President Bio's Local Government Act, which mandates local councils to plan land use, lease land, and issue building permits, functions that had been controlled by the central government – to disastrous consequences, according to Aki-Sawyerr.

“We need to be in control of zoning because if you don't have proper zoning, our city can never be properly planned, and even if it's planned, we won't be able to implement that plan. And then it's all worthless,” she says.

Aki-Sawyerr's plans involve international donors. Engineering studies she commissioned laid out the immediate repairs that need to be made to strengthen the poorest communities, such as Congo Town, an informal settlement.

“We're in the process with funding from Irish Aid and the World Bank to address these very specific issues – stabilisation, retainer walls, footpaths replaced, culverts fixed, drainage put in for the first time,” she says.

Using the engineering studies to prevent flooding, she has tried to make sure the people are informed and involved in the solutions as well.

“If it's new drains being built, they're providing the labour. If they've got carpenters, they are doing the carpentry work. Anybody with the skills in that community gets involved in part of it. And it's part of building the capacity and creating that sense of ownership,” says Aki-Sawyerr.

Building the tourism industry is also part of her grand plan for the capital, she explains, speaking of a meeting she had on Monday with Bio and a delegation from the African American Museum in Washington, DC.

“We had a really constructive engagement on how we can have that museum mirrored in Freetown in order to build our tourism sector and in order to create jobs. So for me, it's about getting the focus on the right thing,” she says.

Aki-Sawyerr is working on sanitation solutions that involve the King Tom and Kissy dumps in residential areas of Freetown. Kissy dump will be closed within the next two years, says Aki-Sawyerr.

“And we've now confirmed that we've got funds to transform King Tom into an engineered landfill,” she says.

In less than a year since taking office, she is attempting to ensure Freetown's issues are being given the attention they deserve.

“I know it's not what other people have thought or expected, but I'm so thrilled – because for the man on the street, for those people living in Kroo Bay, who for the first time in 15 years, their community did not flood last year – this is what they want. And that's why I'm doing it,” she says.