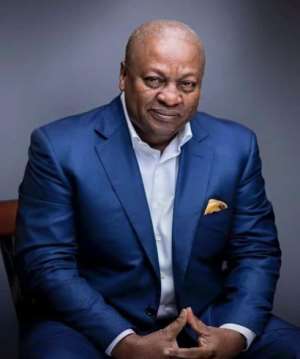 We, the Executives of the NDC Holland Chapter in The Netherlands, have unanimously pledged our unflinching support for flagbearer candidate Ex-President John Dramani Mahama. Notwithstanding the potentials and the strong calibers other six candidates have demonstrated in their bid to lead the great umbrella family, our executives have voted unanimously to support Mr. Mahama’s bid.

Our observations and scientific hypothesis have shown that the best and the most marketable candidate to stop Nana Akufo-Addo-led government to inflict more hardships on Ghanaians is Mr. John Mahama. And as far as we are concerned Mr. Mahama remains the best-known and most accomplished potential NDC candidate in the nation.

We would also like to state categorically that Article 66 (1) and (2) of the 1992 Constitution does not bar Mr. Mahama from running a second term as some evil elements peddling around. If Ex-President John Mahama was eligible to contest for 7th December 2016 election, what prohibits him now from not contesting this time? Indeed Article 60 (6) and (7) of the Constitution exonerates him from any legal challenges. On this note, we unequivocally support his comeback to wrestling power from the inept, kleptocracy, nepotistic, and super-incompetent NPP government.

The Executives took into consideration so many factors to arrive at its conclusion. First, we looked at the candidate's steadiness and responsiveness to political crashes, and we observed that Mr. John Mahama is stable, somber and sagacious. In terms of political experiences, Mr. John Mahama happened to stand tall among other candidates. He has served as Deputy Minister and Minister, MP for 12 years, a Vice-President and a President of the Nation, a record unmatched in the annals of Ghanaian politics. He has an impeccable record for economic development and his vision for infrastructure-driven development is a match to Dr. Kwame Nkrumah.

It would be recalled that when Mr. John Mahama was busy putting up massive infrastructures across the country, the NPP went about telling Ghanaians that infrastructures did not put monies in peoples’ pockets. But today President Nana Akufo-Addo is selling our resources to China for the same infrastructures he condemned. While Mr. John Mahama championing Progressively Free SHS Policy, and by so doing started building numerous E-Block schools to increase the intake of SHS students, Nana Akufo-Addo confused voters with his unplanned free SHS. Today, Ghana stands isolated as the only country using “double-track” system. Sad enough, free SHS has rather become more expensive and a burden for parents. Prior to 2016 general election NPP boasted of having the crop of experts and patriots to transform the economy within two years, and after promising to protect the national pulse, President Akufo-Addo did the opposite by creating 110 ministers, appointed almost 1000 staff at the Presidency. They said to have arrested the Cedi and given the key to the IGP, but today the Cedi is on free-range, and businesses are collapsing, importers are crying, people are crying, and financial institutions are crashing. The so-called economic gurus are now hiding in their doldrums. All these and more vindicate Mr. John Mahama.

After closely monitored the massive crowd that Mr. John Mahama’s campaign tours attract, and after following what is trending on social media, we came to a final conclusion that the best candidate for NDC is Ex-President John Mahama. It is vividly clear that Nana Akufo-Addo and his cohorts hatched a scheme to lie to voters to come to power. And we believe most voters have regretted wasting their votes on President Akufo-Addo/Dr. Mahamudu Bawumia government. Therefore Mr. John Mahama versus Nana Akufo-Addo rematch would be the riveting political story in Ghanaian history.

However, our more concern is the choice of the Vice-Presidential candidate. Vice presidential selection can be something of an open-ended mess, creating as many problems for a candidate as it can help with an election. The vice-presidential selection is intended to be an electoral plus, adding balance to the ticket and hopefully greater voter appeal. In view of this we would also appeal to Ex-President John Mahama to nominate a vice-presidential candidate which will bring a regional balance, should he emerge as the flagbearer.

Finally, we encourage our national delegates to support Ex-President John Mahama’s bid to put to rest unnecessarily challenges which bring wrangles in parties. We believe Ghanaians want to be rescued from economic hardship, unemployment, massive corruption, and super-incompetent family and friends style of governance. We wish to encourage our Party Elders, National Executives, and Executives in Diasporas to come together as a united family to support a candidate who would lead the NDC to a resounding victory in 2020.