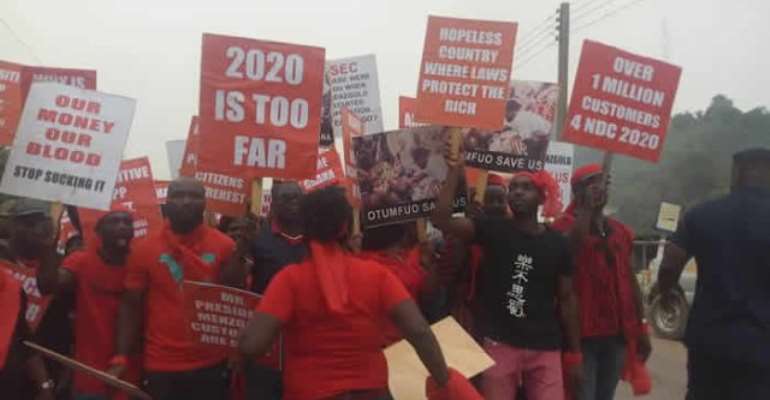 Demonstrators also targeted the Peace Council, an institution usually concerned with the implications of politics on the country's peace and security.

Menzgold customers have launched another demonstration in the Western regional town of Tarkwa as they continue the push to retrieved locked-up investments in business now described as a Ponzi scheme.

This is the second demonstration in the last 50 days after staging one in the Ashanti regional capital, Kumasi on January 8, 2019.

Numbering a staggering 500, the clients in red T-Shirts marched the streets with their placards pointing blame on the government and state institutions for failing to help them get their money back. 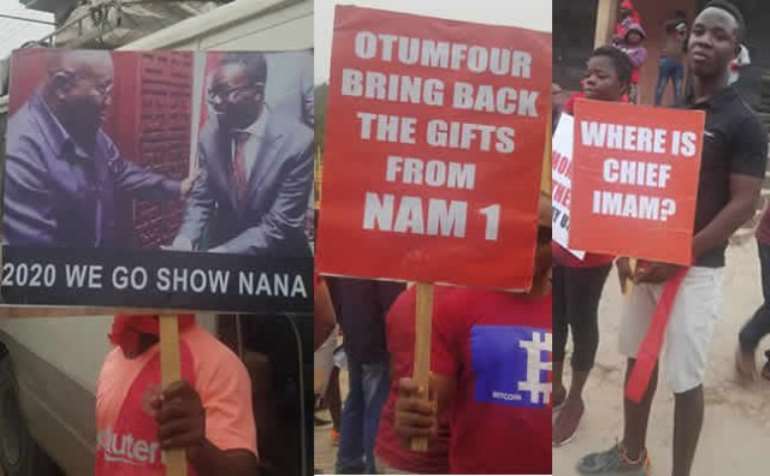 Their placards threatened government over the 2020 elections, roped in the Asantehene who was pictured receiving Menzgold CEO Nana Appiah Mensah in Manhyia Palace in April 2018.

They also targeted the Peace Council, an institution usually concerned with the implications of politics on the country’s peace and security.

But in their justification, the clients have said in a petition to the Peace Council, the continued failure of the state to help them retrieve their monies has implications for peace.

In a more chilling testament to this, one placard read, “our money, our blood.” In the last demonstration, some protesters claimed they were ready to die if that is what it takes to get their monies back.

Their placards reserved space for anger at the apparently unforgotten comments by the Finance Minister Ken Ofori-Atta in November 2018 describing the clients as motivated by greed.

The National Chief Imam also got a special mention on their placards.

Although risk analysts believe their monies are gone forever, the disgruntled customers still hope against all hope even though one of them called Ghana “a hopeless country.”

The new centre for their anger, Tarkwa has some 9,000 clients, organisers claim lending some credence to comments made by former CEO of Minerals Commission Dr. Tony Aubynn.

He pointed out in September 2018, if Menzgold were to collapse, there will be a national funeral and "maybe the biggest funeral will happen in my hometown Tarkwa," explaining virtually all entrenched workers in mining companies in the area have investments at Menzgold.

This is a developing story...keep refreshing.