Who Says Mahama Is Extremely Sarcastic? 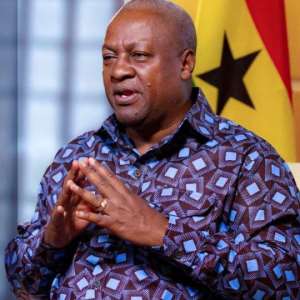 To be quite honest, I was not in the least surprised when I listened to the revoltingly ugly ‘boot for boot’ comment by Ex-President Mahama following the recent Ayawaso West Wuogon incident.

I must, however, confess that former President Mahama’s desperation to return to power is really getting out of hands.

Ex-President Mahama is apparently in the news again for wrong reasons following his unsavoury comment on the unfortunate incident which occurred during the Ayawaso West Wuogon by-election on Thursday 31st January 2019.

Believe it or not, he is reported to have poured his heart out: “We are not going to joke in 2020, and I’m sounding a warning to the NPP – we are going to match them boot for boot. “I want to sound a caution that NDC has a revolutionary root and when it comes to unleashing violence, no one can beat us to that.”

This is no equalisation, far from it, but for the sake of balanced annotation, it is worth recalling that it was former President Mahama who blatantly refused to withdraw the appointment of John Oti Bless, who revoltingly castigated the Supreme Court Judges to the amazement of Ghanaians.

The crucial question then is: was Ex-President Mahama in support of the sickening insults and threats on the eminent Supreme Court Judges?

And more so why did former President Mahama keep mute over the Montie three abhorrent insults and threats on the Supreme Court Judges?

Was Ex-President Mahama oblivious to the naked insults and needless threats by the three Montie boisterous brats on the eminent Supreme Court Judges, and hence remitting their sentences?

Considering the revoltingly ugly events which occurred under his tenure in office, I would like to agree with those who are suggesting that former President Mahama’s ongoing campaign is a mere propaganda tool destitute of honesty and integrity.

Dearest reader, was it not during Ex-President Mahama’s administration where peaceful demonstrators eyeballs were cruelly removed from their sockets and their crania mangled beyond recognition?

Apparently, there is a universally recognised principle which goes: “he who comes with equity must come with clean hands”.

Understandably, the likes of Mahama and his minions would never agree with some of us for constantly choosing to analyse the current affairs through the lenses of the past. But I am afraid we cannot make sense of the present happenings if we refused to take stock of the past events.

Whatever the case, some of us will continue to squall, censure and highlight the risible tendencies of the so-called social democrats.

It would appear that former President Mahama harbours a risible proclivity. For he only hears the alleged misdeeds of his opponents, but not that of his comrades. How bizarre?

If that was not the case, former President Mahama would have dismissed his then assistant, who crudely assaulted a Ghana Broadcasting Corporation’s journalist and maliciously damaged his audio recorder to the disgust of discerning Ghanaians.

As if that was not enough, former President Mahama outlandishly went ahead frolicking by giving needless descriptive nickname to the then acting chairman of the NPP, Freddie Blay.

But unbeknownst to many Ghanaians, former President Mahama can be pugnacious. Thus I find it really difficult to understand why he has been given the appellations: ‘Humble, respectful, peacemaker etc. To be quite honest, I do not think President Mahama deserves those descriptive nicknames.

Well, the preceding assertion may seem frivolous to many of his apologists. However, President Mahama’s seemingly condescending comments on Alhaji Dr Mahmoud Bawumia during the 2016 electioneering campaign really exposed his hypocrisy.

Apparently, according to former President Mahama, the rest of Ghanaians did not have the right to criticise him and his government because we have not sat on the presidential seat before.

Obviously, such thought process was extremely dangerous and undemocratic and should not have come from the lips of a humble president.

With all due respect, Ex-President Mahama’s ceaseless sarcasm is out of this world. He is simply not submissive.

I recall during the 2016 electioneering campaign, A number of prominent Ghanaians and civil society groups, including the Chairman of Peace Council, Professor Emmanuel Asante and the Media Foundation for West Africa (MFWA) beseeched Ex-President John Dramani Mahama to refrain from making comments deemed ethnocentric against the NPP and its running mate, Dr. Mahamudu Bawumia.

In sum, Ex-President Mahama must not and cannot keep insulting Ghanaians intelligence.