By Committee To Protect Journalists Africa 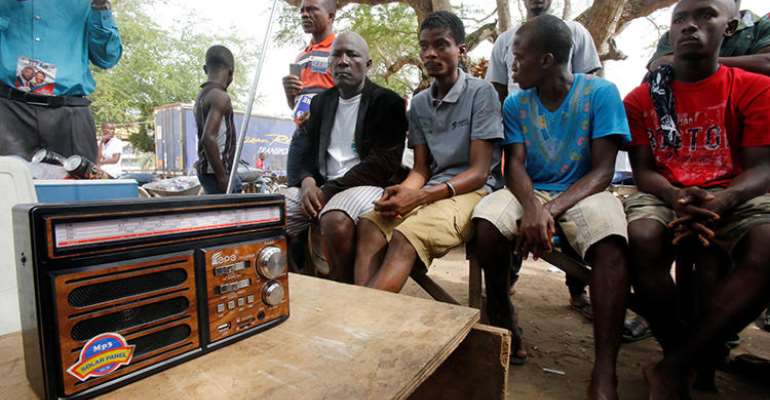 People listen to a radio in Monrovia, Liberia, on December 27, 2017. The Roots FM radio station in Monrovia was recently attacked in two separate incidents. (Thierry Gouegnon/Reuters)

Abidjan, February 15, 2019--The Committee to Protect Journalists today called on Liberian authorities to ensure that those responsible for two recent attacks on independent broadcaster Roots FM are swiftly arrested and prosecuted.

Roots FM owner Henry Costa, who is also the host of the station's popular Costa Show and an outspoken critic of President George Weah, told CPJ via WhatsApp that the station's transmitter and other broadcast equipment were stolen by armed men in the early hours of February 11. It was the second incident at the stations' premises in Monrovia in as many weeks, according to Costa and local news reports.

"We urge the Liberian government to send a strong message that it is committed to freedom of the press by moving speedily to arrest those behind the attacks on Roots FM," said Angela Quintal, CPJ Africa program coordinator, in New York. "Ensuring that the culprits are identified, prosecuted, and convicted will signal to those who want to silence the media that they will find no ally in President Weah's administration."

Costa told CPJ that workers were doing regular maintenance on the Roots FM transmitter at about 3 a.m. on February 11 when they were overpowered by two armed men who stole the transmitter and other equipment. The station was off the air until February 13, when it was able to borrow a transmitter from another station, Costa said; Roots FM was also able to purchase a new transmitter through a GoFundMe campaign.

On January 31, Roots FM was unable to broadcast for 13 hours after armed men overpowered the station's security guards and cut its transmitter cables, according to Costa and news reports. Costa told CPJ that he was unable to do his show that morning but that the station was back on air by late afternoon.

That attack came as Roots FM was covering a controversial government fishing deal that the Liberian government was forging with Senegal, Costa said.

He told CPJ that, before the attacks, Roots FM had experienced a large number of threats on social media from supporters of the ruling Coalition for Democratic Change party.

On February 11, Information Minister Lenn Nagbe said in a statement published on Facebook that the "government strongly condemns this and all acts of violence which target the fundamental tenet of our democracy, the press." The statement said that an investigation has been opened into the attacks.

A letter dated February 14 from Inspector General Patrick Sudue to Roots FM station manager Fidel Saydee, seen by CPJ, confirmed that the Liberian National Police are investigating the matter. Saydee told CPJ that his statement was taken today by the police anti-robbery unit.

"The only motive that could provoke such an attack would be our critical stance on national issues," Saydee told CPJ.

Sudue had not replied to several calls and messages from CPJ by the time of publication.