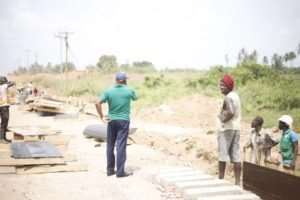 The Member of Parliament for Mpohor Constituency, Honourable Alex Agyekum paid a first working visit to the Engineers, Foreman and the field workers on the Apowa Mpohor-Benso road and was overwhelmed to see the progress of the project.

"Now I need to confess this. What I saw was way beyond what I had imagined...it was simply overwhelming to see what all of us have done as a people in this shortest possible time," he stated.

Honourable Alex Agyekum, who is also the Chairman of the Select Committee on Youth, Sports and Culture in Ghana's Parliament hinted that the Eshiem - Manso-- Benso Bitumen Surfacing will soon see a positive approval from the Minister by next month

He said he is seriously lobbying for it to be awarded on contract and from the assurance he has received from the sector Minister he is confident that the deplorable road will be rehabilitated this year.

The 15.5km Bitumen Surface stretch is being funded by the Government of Ghana ( G.o.G ) and executed by M.S. J.P.P. CONSTRUCTION AND SERVICES LTD. 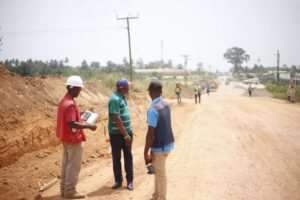 Honourable Alex Agyekum praised the Minister, Honourable Amoako Atta and the Feeder Roads Manager for agreeing to increase the scope of work on the 51.5km Apowa - Mpohor - Benso road to be done by increasing the axle load capacity due to future heavy-duty vehicles that will ply the road.

The District Chief Executive of the Mpohor District, Honourable Ignatius Asaah Mensah commended the President who cut sod together with the Mp and himself late last year for the commencement of work and pledged the Assembly's support for early completion of it.

Hundreds of drivers who ply the road and some residents express delight to the Member of Parliament, Honourable Alex Agyekum and the District Chief Executive Ignatius Asaah Mensah for their efforts in seeing this road back to life

The Member of Parliament was accompanied by the District Chief Executive and some Constituency Executives led by the Chairman Mr. Appiah and the first Vice Chairman Mr. Razak.