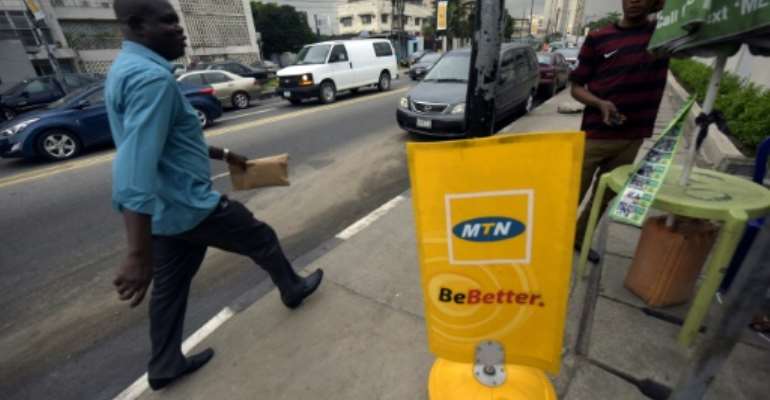 South Africa's telecom giant MTN has operations in different countries including Nigeria, where it was fined in 2015 for missing a deadline to disconnect unregistered SIM cards. By PIUS UTOMI EKPEI (AFP/File)

A former South African ambassador to Tehran was arrested and brought before a commercial crimes court on Thursday for allegedly taking a bribe linked to a major Iran mobile phone tender, police said.

Yusuf Saloojee, 75, who is now retired, stands accused of corruption and foreign bribery.

He allegedly received cash in return for helping South African telecoms giant MTN secure a contract to operate in Iran in 2005, while he was ambassador there.

"Saloojee allegedly pocketed 1.4 million rand for his role" and is said to have used the money to purchase a house in Pretoria, police spokesman Hangwani Mulaudzi said in a statement. The figure is equivalent to $100,000 at current exchange rates.

According to South Africa's elite police Saloojee was allegedly involved in facilitating the cancellation of a cellphone operating licence that had been awarded to Turkish mobile company Turkcell.

Saloojee is believed to have been part of "deceitful corrupt activities with Iranian officials after Turkcell Consortium was awarded a lucrative... (GSM-licence) to operate in Iran for 15-years," Mulaudzi said.

The former ambassador was freed on $280 bail and was ordered to return to court on April 17.

Turkey's Turkcell which lost out in the competition, in 2012 filed a $4.2 billion lawsuit in Washington alleging that MTN had bribed Iranian officials and pressed Pretoria to offer weapons and diplomatic support for its nuclear programme.

It claimed it had already won the deal through an international tender, but its licence arrangement was suddenly dropped in favour of MTN.

The South African company was later cleared of wrongdoing.

MTN holds operating licences in 22 countries in Africa, Asia and the Middle East.

Bawumia calls for greater unity, cooperation between Muslims...
35 minutes ago