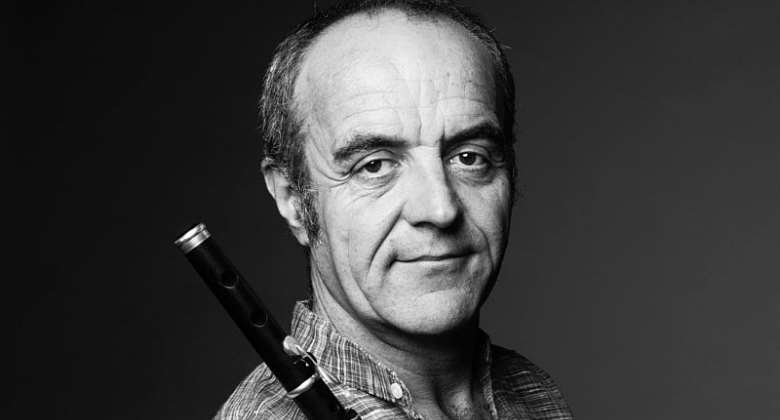 French flute player and composer Jean-Luc Thomas travels the world performing with, and learning from, musicians from countries as diverse as Brazil, Niger, India and Ireland. "Everybody was my teacher," he says. Most recently, as co-composer of the score for Ex Anima by avant-garde circus and equestrian artist Bartabas, he's been learning from horses.

"Horses are sensitive to sounds," Thomas told us before going on stage at the Zingaro theatre in Paris where he plays flute as part of a quartet providing the music for Ex Anima.

"I can see every night when I play here, the interaction between not especially music, but sounds.

He explains it was a very gradual process getting the horses used to the percussive music, starting with acoustic then building up over several weeks of rehearsal.

The show uses different wooden flutes and the jew's harp to literally breathe music into the theatre.

"Ex anima means 'from the soul, from the breath', says Thomas. "Bartabas wanted to bring something connected to the breath of the soul."

Thomas is passionate about music but his love story with the flute began when he heard The Chieftains playing in concert.

"I heard Matt Molloy playing, this Irish master of the wooden flute, and wow, something happened to me."

There weren't many flutes around in his native Brittany so he travelled to County Clare in Ireland to hone his technique alongside some great violinists and pipers.

Celtic music has remained a staple in his career but he's recorded several albums with renowned flute players in many other countries.

He recorded Zinder with Serendou - a trio he formed with Nigerien flute and kamélé n'gouni player Yacouba Moumouni and calebasse player Boubacar Souleymane.

And most recently he's released Kerlaveo with a fine band of Brazilian musicians including Vitor Lopes, a renowned harmonica player from Sao Paolo, popular on the choro scene.

Kerlaveo is the name of Thomas's home in Brittany and means "farm of the audacious" in Breton.

The name seemed appropriate considering "the way we play together, and love each other," says Thomas. "We're not afraid to connect the South of Brazil with Breton dance or to Japanese influences or the Jewish tradition. "Maybe we are audacious. I don't know."

The healing powers of music

Thomas is not the first musician to feel music has healing powers. But he goes that bit further citing difficult teenage years when he often "felt lost".

"It saved my life," he says describing music as "a compass".

He cites Nigerien flute player Yacouba Moumouni who left his family when he was seven years old, crossed the desert and went to Niamey where he lived in the streets.

"We should all play music and sing, work for good vibes in the world," he concludes.

Any decision on Achimota Forest should either add more ecolo...
38 minutes ago