Make Hunger A Thing Of The Past—Pope Francis 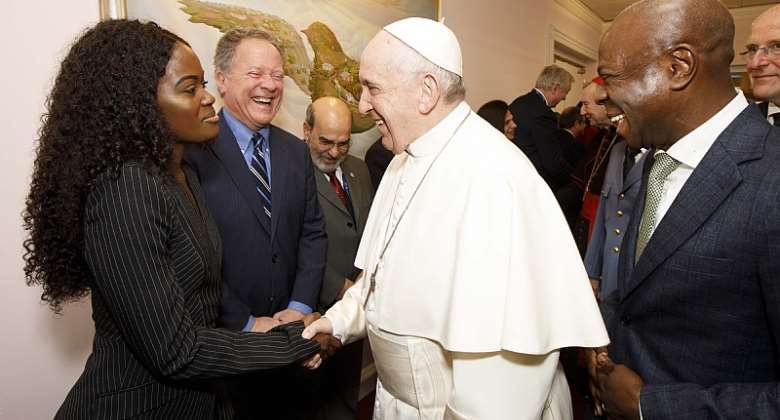 Rome, 14 February 2019 - Pope Francis set the tone for the 42nd session of the annual Governing Council of the International Fund for Agricultural Development (IFAD) by saying that hunger can be made a part of the world’s past, but only if all institutions and people work together, and only if these efforts are owned locally and driven by those who are suffering most, as architects of their own development.

“We have to see to it that each person, each community can utilize their own capacities to live a full life with dignity,” Pope Frances said, adding that IFAD’s contribution is essential for “eradication of poverty, the fight against hunger and the promotion of food sovereignty.”

IFAD President Gilbert F. Houngbo said that the Pope’s message to the UN agency served as a reminder of the importance of IFAD’s mission. “Our investment in rural youth and the operations that our teams carry out every day in the field are based on a deep conviction,” he said. “We cannot and shall not return to a world where hunger increases every year,” Houngbo added.

Citing the strong collaboration between IFAD and its host country, Italian Prime Minister Giuseppe Conte said that “our common goal must be to strive and contribute to the development of a mature and sustainable African entrepreneurship, and to support young people and women,” noting that women “have always been the fulcrum of the rural economy," as well as “custodians of the earth and the first responsible for the care of new generations.”

Speaker after speaker expressed concern at the troubling rise of hunger and poverty in recent years, and the need for more vigorous action to combat it.

“On our continent the inequalities are deep, if we talk about opportunities they are not the same for those who are born male or female ... to be born in the capital or to be born in a rural area,” said Danilo Medina Sánchez, President of the Dominican Republic, who reaffirmed his commitment to closing the inequality gap and continuing to build “hope” in rural areas.

Throughout the day, the need to expand economic opportunity to the poorest people was voiced by many including Geraldine Mukeshimana, Rwanda Minister of Agriculture and Animal Resources who delivered an address on behalf of President Paul Kagame. She said that rural women still face many challenges such as access to land, education and finance, even if they work longer hours than their male counterparts. But Mukeshimana added that the country is making strides in “actively changing the attitude of youth to agriculture” and that “the energy of young women and men are starting to yield results.”

The opening session featured a solo performance by world-renowned violinist and UN Messenger of Peace, Midori , and the designation of award-winning choreographer and dancer Sherrie Silver as IFAD’s first Advocate for Rural Youth .

The other UN food agencies and close allies of IFAD’s mission – the Food and Agriculture Organization of the United Nations (FAO) and the World Food Programme (WFP) - echoed the message of collaboration in their addresses to the Governing Council, IFAD’s highest decision-making body.

FAO Director-General Jose Graziano da Silva said, “Let me stress FAO’s commitment to deepen the collaboration with IFAD and WFP to deliver on our common goal of a world free from hunger and all forms of malnutrition.”

David Beasley, the Executive Director of WFP, highlighted the important role of smallholder farmers. “If we all work together to fix the structural problems that exist in global food systems, which mean so many food producers are also food insecure, we have a real shot at achieving zero hunger by 2030,” he said. “This is why the Rome-based agencies are collaborating to support innovation and entrepreneurship among smallholder farmers. ”

The first day concluded with an interactive panel on the best approaches to providing access to finance for rural youth. Tomorrow the Governing Council events continue with the launch of an impact fund targeting rural entrepreneurs with Neven Mimica, European Commissioner for International Cooperation and Development and a presentation by Gunhild Stordalen, Executive Chair of the EAT Foundation, who will talk about feeding a growing population on a planet with finite resources.