Gov't Could Have Created More Regions If..... 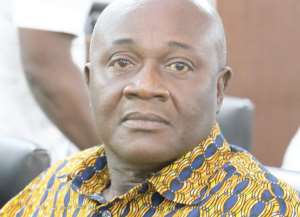 Minister for Regional Reorganizations and Development, Dan Botwe says more regions could have been created if there were substantial demand for them.

According to him, the constitution allows for more regions to be created if the necessary conditions for their creations are met.

Speaking on Citi TV's Point of View on Wednesday, Dan Botwe said government is open to receive petitions for the creation of additional regions but said receipt of such petitions will not automatically guarantee the creation of the expected regions.

He said the creation of new regions are among other things subject to advise from the Council of State and a Commission of Inquiry.

He also added that the people in any such proposed new region must demonstrate their preparedness to be severed from an existing region through a referendum.

“Yes we could [get more regions] because the constitution doesn't set any limit but it is always subject to advise from the Council of State and a report from the Commission of Inquiry. The people too must express their like for the new region in a referendum. They must confirm their interest in a [massive] YES vote. So these are things that you have to go through,” he said.

“The fact that they have petitioned does not automatically mean they will get it,” the minister said.

He explained that while the first step for the creation of a new region was a petition from the leadership of the proposed area, the petition could be turned down by the Commission of Inquiry.

Dan Botwe noted that the Commission of Inquiry had turned down a number of petitions that bothered on regional reorganizations including those that sought to join areas proposed to be carved out for a new region.

Six new regions are expected to be formally created by the government by Friday, February 15, 2019, when president Akufo-Addo publicly presents the Constitutional Instruments (CI) that back their creation to the respective petitioners.

So far, the Chiefs and people of Bono East, Ahafo, Savannah and North East region have received their CIs and their capitals named.

Dev't won't be centered in capitals

The naming of the regional capitals for the new regions has become a controversial subject as jostling for the capital by various towns in the regions started many months ago.

Areas such as Salaga and Nkoranza have expressed their displeasure in not being named regional capitals for the Savannah and Bono East regions respectively.

In Salaga, irate youth expressed their displeasure by burning down the governing New Patriotic Party's (NPP) party office in the area and destroyed billboards of the party.

Like other aggrieved areas, they said they fear development may be centered in just the areas named as regional capitals.

But the Dan Botwe has given assurances that development will be spread across the new regions and will not be centered in just the new capitals.

He said the government is working hard to ensure that development, which is a key basis for the push for the creation of the new region is seen in the new regions.