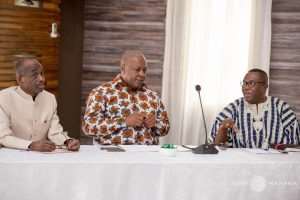 Countries in the sub-region and elsewhere on the African continent reportedly raised questions about the violence that occurred at the La Bawaleshi polling centre during the Ayawaso West Wuogon by-election.

According to former President John Dramani Mahama, these are countries that look up to Ghana as a beacon of democracy.

Speaking on Wednesday at a meeting at Peduase with members of the Diplomatic Corps, former President John Dramani Mahama said the circumstances of the violence was not a reflection of Ghana's democracy.

He said even though the violence was state-sponsored, it is not the true image of the democratic culture Ghanaians enjoy.

“The violence took a different form, one it was state-sponsored because those who were involved in this were brought there by the state. They were armed to the teeth; they discharged weapons and injured several people. Unfortunately, that is not part of Ghana's democratic culture. It was a day of shame for Ghana because Ghana has always been seen as the model of democracy in Africa,” he said.

The former president also stated that since the Ayawaso West Wuogon by-election saga, he has been short of words in answering some of the questions been asked by leaders of other African countries who look up to Ghana in term of democracy.

“For me, I received many queries from different countries, from Nigeria, from Sierra Leone, Kenya, Liberia, and other places I have gone to monitor elections. I found it difficult to explain. How could I explain to them that, this was Ghana a country that everyone looks up to,” he said.

There have been a number of violent attacks staged by vigilante groups under both the previous National Democratic Congress (NDC) administration and the current New Patriotic Party (NPP) government.

The Minority has blamed President Nana Akufo-Addo for failing to deal with vigilantism.

Many of the attacks staged by vigilante groups under the Nana Addo administration include the attack on the Tamale Teaching Hospital CEO and the Delta Force's attacks in Kumasi among others.