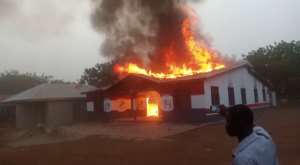 Stakeholders within the newly created Savannah Region have called for calm following violent protests that rocked the naming of Damango as the capital for the area. Some people in the town went on rampage on Tuesday and were seen in some videos burning down offices of the governing New Patriotic Party (NPP).

They say they felt insulted that Damongo, which voted for a National Democratic Congress (NDC) candidate, Adam Mutawakilu, was instead honored and selected as the capital .

Speaking on Eyewitness News on Tuesday, a member of the Coordinating Committee of the Gonja Traditional Council, Osman Mohammed Amin, said that such reactions are uncalled for because Damango was generally accepted as the capital by the stakeholders in the area.

“We had a consensus among ourselves… The king of the Gonja Traditional Council made it known that he would prefer Damango,” he said.

He also reminded that the focus of the new Savannah Region was to ensure development for all.

“I will call on our people to be calm. The whole point of the new region is about development and we all thought that we needed the region to come so that we get development for our people.”

Damango was named as the capital for the Savannah Region on Tuesday after President Nana Akufo-Addo begun presenting Constitutional Instruments for the creation of new regions.

The President also announced that the oldest town in the East Mamprusi Municipal Assembly, Nalerigu was to be the capital of the North East Region.

The choice of Nalerigu was well received and has not spawned any protests though Walewale was also hoping to be selected as a capital.