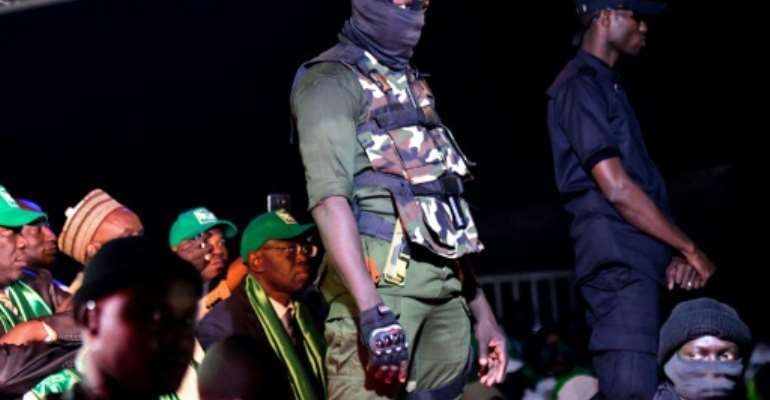 Security agents at a rally staged by Issa Sall in Dakar on February 3. By SEYLLOU (AFP)

Police in eastern Senegal have made two dozen arrests and seized knives and clubs after clashes in the run-up to presidential elections left at least two dead, officials said on Tuesday.

The violence erupted on Monday in Tambacounda, 400 kilometres (250 miles) east of Dakar, pitching supporters of President Macky Sall against those of opposition candidate Issa Sall.

One supporter of the president was fatally stabbed by a suspected member of the opposition Unity and Assembly Party (PUR), the sources said.

A second fatality was part of a group of young pro-government motorcyclists that tried to prevent Issa Sall's motorcade from leaving the town. He was hit by a vehicle and died, they said.

Local media reported that a third supporter of the president died of injuries, but the officials did not confirm this.

"The gendarmerie have arrested 24 people," a security source in Tambacounda told AFP on Tuesday.

Moustapha Sarr, a senior official with PUR, said 20 of the arrests were supporters of Issa Sall.

Macky Sall and Issa Sall share the same surname but are not related.

Eight journalists who were covering Issa Sall's campaign were hurt when their minibus was attacked by suspected supporters of the ruling coalition, organisations representing media workers said.

Senegal, a former French colony, has been buffeted by violence ahead of the February 24 vote, which Macky Sall hopes to win outright in the first round.

On Sunday at least two people were "seriously injured" in Fatick, a presidential stronghold in Senegal's centre-west, in clashes with supporters of rising opposition candidate Ousmane Sonko, local media reported.

Four people, all Sonko supporters, were badly hurt on February 4 in the northern city of Saint-Louis, Sonko's campaign said.

Issa Sall said on Twitter on Tuesday that after the "tragic events" in Tambacounda, he would be "suspending" his campaign and heading back to the capital.

On Monday, the president called for calm but took aim at his predecessor and political rival, Abdoulaye Wade, who last week called for his supporters to burn their electoral registration cards and ballot sheets.

The clashes "are the result of the call for violence by certain political leaders... who will be brought before the courts to account for their acts," President Sall said.

Senegal's election campaigns are often marred by accusations of corruption, influence-peddling and dirty tricks, misinformation, although the country is also often held up as a beacon of democracy and relative prosperity in West Africa.