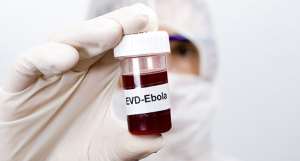 Nowadays we now know that monkeys do not get Aids when infected with the human Aids virus while Ebola already existed in 1943 Crimea.

We also know that the American Centers for Disease Control, guided by the WHO, are taking massive blood samples from African natives specific in order to investigate the fact why they survived Ebola.

Reading our https://secretsofaidsandebola.blogspot.com/ would reveal about genetic engineering of viruses connected to certain blood types they could find out which blood type is responsible for this survival against Ebola.

Readers! Can you imagine those scientists are able to use genetic engineering techniques to contaminate these survivors of Ebola as well? They can do that the same way as they did with AIDS!

If we compare these findings to our references in: “Aids and Ebola the greatest crime in medical history against mankind”, the book now available at Amazon, the HLA-A, B, C, DR3 and DR5 loci, is examined by the Nazi’s led by Otmar Verschuer.

The same investigation is now happening with Ebola blood samples. Furthermore, we have to take into account that within people who have blood type HLA-DR3 Aids, it is much less common than in people who have the HLA-DR5 type.

Under the Nazi’s research, it is important to note that precisely the HLA-DR5 type occurs mainly in Jews. The HLA-DR3 type contrast is most common in dark-colored Africans.

The pieces of evidence or references are enough to let you know vividly what takes place. In general, you can say that it is harder for blacks to get Aids than as it is for whites, but blacks have been made susceptible for a broad spectrum of brand new diseases caused by Germans, partly under the auspices of the South African Apartheid. And this is going to be repeated with Ebola.

That is the reason we would like to warn African leaders not to allow foreign governments, WHO and CDC to carry out these kinds of experiments on African natives. And who is behind WHO? It's Bill Gates who is, after the USA, the biggest sponsor of the WHO and one of his main goals is to depopulate Africa with the help of vaccines.

Thousands of Ebola blood samples taken from patients during the 2014-16 epidemic in West Africa are now held in secretive laboratories around the world.

The samples have enormous value to researchers involved in creating new vaccines and medicines but also to military defence facilities such as Porton Down in the United Kingdom where research on biochemical agents and their antidotes is conducted.

Now several African scientists and Ebola survivors accuse the laboratories of biological asset stripping. Despite the samples having been taken from thousands of Africans, scientists from these patients’ home countries - Sierra Leone, Guinea and Liberia - are unable to access them for their own research.

“When you take Ebola blood samples for further investigation you should keep them in your own laboratory,” says Dr. Fatorma Bolay, the director of the Liberian laboratory where Ebola samples were stored before they were shipped to the United States in 2016.

During the epidemic, more than 269,000 samples were extracted from patients for diagnosis, according to the World Health Organization. Many were destroyed but thousands were exported abroad, including more than 10,000 to the UK.

After the epidemic, the WHO tried to create a global inventory of all the Ebola samples but was unable to complete the project when laboratories in South Africa, France, and the United States refused to disclose how many they held.

The agency, which operated four laboratories in Sierra Leone during the epidemic, initially rejected the request for transparency, saying much of the information was classified for reasons of “national security”.

The commissioner slammed PHE, saying; “it had identified that it does hold information within the scope of some of the complainant’s requests, having originally stated more than once that it did not. "She concluded that; “situations like that diminish the public’s trust and confidence in PHE."

The Public Health Department it turns out holds more than 10,000 Ebola blood samples in a UK biobank whose location remains secret but is most likely at Porton Down near Salisbury.

How were the samples shipped from Sierra Leone? “We’re not allowed to tell you,” says Dr. Tim Brooks, the head of PHE’s Rare and Imported Pathogens Laboratory.

Dr Brooks says the samples were brought to the UK “so that they could be stored in a proper curated biobank system”, but that they belong to the government of Sierra Leone.

He admits that none of the people whose blood was taken gave their consent for research and the samples are still linked to the clinical and personal data of the patients. He says that research can be done “so long as you don’t have any way of identifying that person, who they were, where they lived”.

Regarding the profits from any vaccine or medicine created with this research, Dr. Brooks says; “This would be a question for the committee that approved the study, which includes the government of Sierra Leone.

He adds: “I think it would be inappropriate to do anything more than to publish that in the open literature.” While the British and French laboratories were working in their former colonies during the 2014-15 outbreak, the US was most active in Liberia, where it has been involved in medical research since the 1950s.

When the Ebola crisis hit, the US quickly dispatched a team to Liberia’s Institute for Biomedical Research (LIBR) from its Army Medical Research Institute of Infectious Diseases, a unit tasked with countermeasures against biological warfare.

Most of Liberia’s Ebola samples were stored at the LIBR until 2016 when they were spirited away to a high-security laboratory in the US where they remain today.

During the epidemic, the US alone spent hundreds of million dollars on Ebola-related research and several patents have been filed using West African samples.

“Why do the United States hold Liberian samples?” asks Dr. Stephen Kennedy, a researcher at the LIBR who was one of the first to conduct Ebola tests in Liberia.

“It’s true we don’t have a BSL3 high-security laboratory but we could have stored and catalog these samples until we got funders to build a BSL3. The whole thing was done in secrecy,” he says. And the agreements signed between the corrupt Liberian Government and the US remain under wraps.

In January 2017, Dr. Kennedy and several colleagues met the Liberian Minister of Health to request that the samples be returned to Liberia but without success. “The samples have to return, they have to come back. There’s no question about that,” says Dr. Kennedy.

“We took risks and we never benefited,” says a Liberian technician who drew over 1,000 samples of blood, knowing that a single drop could kill. “After the samples were collected, we were left out of the picture,” he says, speaking on condition of anonymity.

He was angry the samples were sent abroad. “The research that you’re going to do with these samples abroad, should be done here so that the citizens of this country benefit from that research.”

Many scientists across West Africa only realized the importance of the samples after they had left their countries. Dr. Sakoba Keita, who led Guinea’s fight against the virus and then became the head of the National Health Security Agency, says: “It’s only later on that we realized that they were of scientific interest, at the time of the epidemic, my focus wasn’t on that kind of question.

For me, the concern was to stop the disease and its spread, and the death of my fellow citizens.”

In 2017, Keita sent a letter to all the laboratories holding Guinean samples to reaffirm his country’s ownership over them and any benefits derived from them; not all replied, he said. He also requested that labs send updates on the research conducted with the samples, but few keep him informed.

While most researchers are now aware that research is conducted with these samples, the former patients are not. The Telegraph interviewed two dozen Ebola survivors in Guinea, Sierra Leone, and Liberia, and none of them knew that their blood was being used for research, nor had they given their consent to it.

None of the research institutes we contacted could provide written consent forms.

A team from the Guinean Ministry of Health was sent to investigate and they took blood samples from her and several others which they sent to the Pasteur Institute in Lyon and the BNI in Hamburg. Researchers here detected Ebola and raised the alarm.

“These viruses came from the very first specimens [around 20 samples] which were sent by Médecins Sans Frontières to us in Hamburg, in March 2014,” says Dr. Stephan Günther, director of the BNI lab. “So we isolated the virus. And this virus isolate was distributed to many many institutions around the world to make sure everyone who needs the virus can work with this virus.”

Nevertheless, Dr. Günther says that there was no genetic material from C15 in these isolates. The fee charged for the virus, he says, covers the production costs as well as a contribution to maintaining the high-security laboratory.

The virus isolated from the blood of Ebola survivors is scrupulously exported to labs around the world, some of which cultivated the virus and shared it with other labs.

“The distribution of viruses to all labs requesting it has been usual practice for the past 100 years and there was nothing wrong about it,” says Günther in an email. But this changed on 12th October 2014 when the Nagoya protocol entered into force.

This agreement, ratified by 116 countries including the UK, guides how benefits derived from research on biological materials should be shared with their countries of origin.

Enormous stakes hang on the application of the protocol because valuable pharmaceutical products can be developed using pathogens collected in human blood. The vaccine against Ebola that is being used right now in the Democratic Republic of Congo - rVSV-ZEBOV - was developed with a strain of Ebola exported from the country in 1995.

Another Ebola vaccine, GamEvac-Combi, was developed using the genetic information of the virus isolated from the blood of C15. This vaccine is now being tested on 2,000 patients in Guinea in a lab built by Russia during the epidemic.

A dozen scientists work there but it’s impossible to get in or talk with anyone. “When you’re talking about the Russians, it’s a total blackout,” complained a high-ranking member of the Ministry of Health who preferred to remain anonymous.

But physical samples were not needed to develop the Russian vaccine, because the virus’ genetic sequence could be easily found on the internet, for free. Whether such information is covered by the Nagoya protocol will be hotly debated over the next few years - as will who should benefit.

There are still no licensed vaccines for Ebola, although two vaccines are currently being tested in humans in a number of countries. Which countries? African countries again of course?

We have to warn all African Leaders against these possible crimes. If they would like to do experiments, they should first try them on white skinned people, before trying it on Africans.

Besides that, African leaders, how stupid can you be for do not see the differences between Ebola and AIDS vaccine trials in western countries and Africa?

All vaccine trials applicated in Africa are forbidden in the so-called civilized countries. We only can think of one thing and that's money to pay your corrupt regimes.

JHS Not Increased To Four Years Or Reduced SHS Duration – Na...
32 minutes ago

We've Been Begging To Survive Over Closure Of Our Shops – N...
32 minutes ago