Pro-govt supporter killed in Senegal clashes ahead of polls 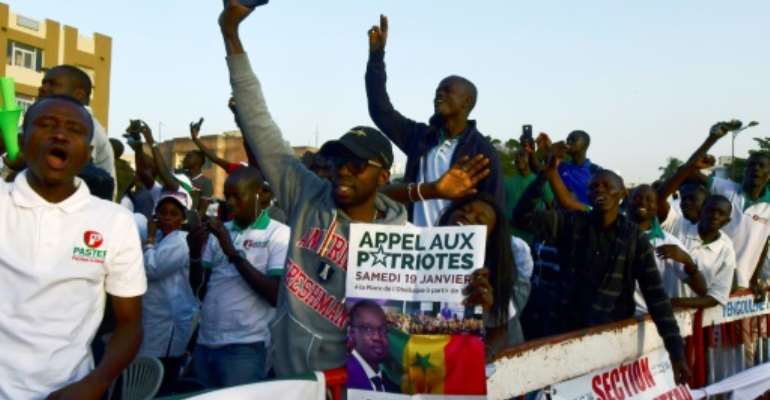 Emotions are running high in Senegal in the runup to elections on February 24. By SEYLLOU (AFP)

A pro-government campaigner was killed in eastern Senegal on Monday, in the first fatality from a string of pre-election clashes between supporters of President Macky Sall and the opposition.

A police official told AFP the individual was stabbed during "scuffles" between the Unity and Assembly Party (PUR), which is led by opposition leader Issa Sall, and pro-government campaigners.

The body was taken to a hospital in Tamboucounda, about 400 kilometres (250 miles) east of Dakar, the source said.

A police source said a motorcyclist was killed by a vehicle speeding away from the scene of the stabbing. A journalists' association meanwhile said eight reporters were also injured in the violence.

President Sall told an election meeting that the stabbing victim was a member of his governing Senegalese Democratic Party and called for "light to be shed (on the killing) so that the electoral campaign does not become a pretext for violence."

Violence has buffeted Senegal ahead of presidential elections on February 24, despite appeals for calm from religious leaders.

Sall urged his supporters not "to succumb to provocations" and called upon political rivals to issue similar appeals.

"This is a result of a call to violence issued by certain politicians," the president said of the death.

"They will have to answer for their actions in court," he added,

On Sunday at least two people were "seriously injured" in Fatick, a presidential stronghold in Senegal's centre-west, in clashes with supporters of rising opposition candidate Ousmane Sonko, local media reported.

Four people, all Sonko supporters, were badly hurt on February 4 in the northern city of Saint-Louis, Sonko's campaign said.

Senegal, a former French colony, is seen as a beacon of democracy and relative prosperity in West Africa.

But its election campaigns are often marred by accusations of corruption, influence-peddling and misinformation.