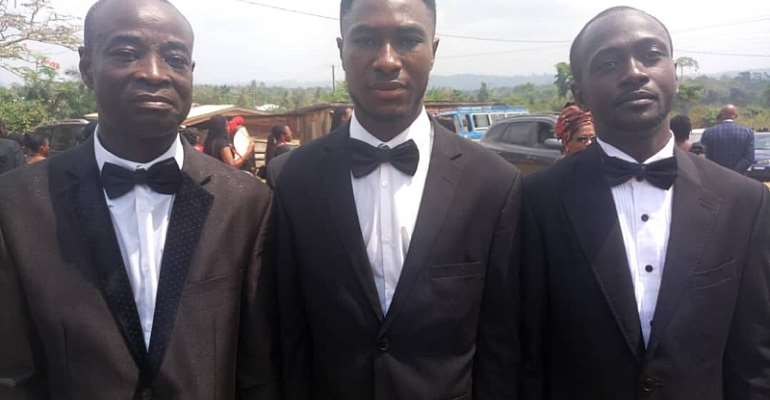 Clifford Frimpong, GSA Director of Testing (left) with some of his siblings

A large crowd was at Morso in the Ashanti region over the weekend, to bid farewell to Justice William Frempong, an Elder of the Christ Apostolic Church y.

The late Elder Frempong died on September 4, 2018, aged of 74, he was the father of Clifford E. Frimpong, Director of Testing, Ghana Standards Authority (GSA).

Among the large crowd of mourners was a high-powered delegation from the GSA, led by Dr. Poku Adusei, a Deputy-Director General, in charge of General Service.

In the biography and various tributes, to the respected religious leader and mathematics teacher, he was described as an inspiration and mentor par excellence by his widow, children, grandchildren, In-laws, Opoku Ware old boys (Akatakyie's), and members of the Cooperative Credit Union. He was referred to as a blessing to humanity.

Elder Frempong, taught Mathematics at OWASS for 32 years, and as expected, the Akatayie's turned up in their numbers to pay their last respects to a man in whom they were well pleased.

We called him Freshman, because when he arrived at Opoku Ware School, in September 1972, to teach, he introduced himself in class as ‘a freshman from Winneba', in reference to the Winneba Specialist School, where he trained as a Mathematics tutor. It was a nickname he revelled in (not that he had a choice anyway) because students hardly consult a tutor before giving him or her a nickname.

Not many remembered or could be bothered to find out his real name, but the fondness for the man with the distinct, bushy beard and a warm smile was not in doubt.

Over the next thirty-two years, ‘Freshman', or ‘Koo Fresh', as we sometimes called him, endeared himself to students with his easy style. He was the tutor you loved to love, because he was not a cane-wielding sadistic tutor who made your life hellish and miserable in the name of discipline.

But this was by no means to be taken as him being soft or laid back with students. He had the wherewithal to ensure that students did the right thing and did not stray from the rules. He had a different, people-centred approach.

Opoku Ware School was his life and family because this was, essentially, where his career took shape and where he raised his family. Such was his love for the school that he sent all his five sons to Opoku Ware including: - Akatakyie Clifford Frimpong (AF 105), Justice Frimpong (AK 163), Peter Frimpong (AO 199), Abraham Frimpong (AX 226), and Benjamin Frimpong (BE 205). Three of his nephews namely Kwaku Owusu Abrokwah (AH 1), Collins Kofi Adarquah (AQ 75) and Bright Okyere Sasu (BF 176) also went to OWASS, whilst his grandson, Justice W. Frimpong (BW 95) is currently a student there.

‘Freshman' served OWASS well and to the best of his ability. We shall retain many fond memories of what he stood for with his long and dignified service, his quiet disposition, his wisecracks and above all, his gentle nature. He was a true gift to the school.

The late Justice William Frempong was born on September, 18, 1944.

He was the fourth out of the nine children of his parents in addition to half siblings from his father’s side.

On completing the programme, he taught at the Morso Local Authority Primary and Middle Schools from 1965 to 1970. He sat for the GCE “O” Level examination in 1969 and gained admission to the Advanced Teacher Training College (ATTC) in Winneba to specialise in Mathematics from 1970 to 1972. Within this period he also taught at Ghana Secondary Technical School (GSTS) in Takoradi.

On completion in 1972, he was posted to OWASS in September, where he taught Mathematics and rose through the ranks to Assistant Director, until his retirement in 2004. Thus, almost all his working life (32 years) was spent at OWASS, where he trained a lot of students, some of whom have occupied and continue to occupy various positions at home and abroad.

His sense of humour and excellent human relations brought students and staff closer to him, earning him nick names such as “Freshman”, “Koo Fresh”, “Abodwese”, and Ojuku, etc.

Koo Mpong was a very committed and responsible family man who brought up his children in the ways of the Lord. He was a unifier in the family and brought everybody together. He was open to all and helped as many as he could in diverse ways. This attracted people to him and it was therefore not surprising that a number of people took him as their father.

Koo Mpong was very active and loved sports, especially football. He was part of the dreaded Morso team that outclassed Asante Akyem area in his heydays. He went on to play for Upper Stars whilst in Novrongo. He was an ardent fan of Kumasi Asante Kotoko.

He was baptized into Christ Apostolic Church International (CACI) in January, 1976 and never looked back from that time. He was a devoted Christian who never compromised on his belief in God.

He held several positions in the church and was very instrumental in planting other branches of the church in the Ashanti Region.

He was married to Mrs. Mary Frempong (Afua Serwaa Akoto) and their marriage was blessed with eight children, three girls and five boys. His was a life well-lived, and whilst we mourn his passing, we thank the Lord for the gift of his life, and join the entire family, particularly his widow and our Akatakyie brothers who are his family members, in consoling them in this difficult time. The loss is not theirs alone. We share in their pain and grief.