2019, Buhari, Atiku And Others: The Mistake Nigerians Should Not Make Again 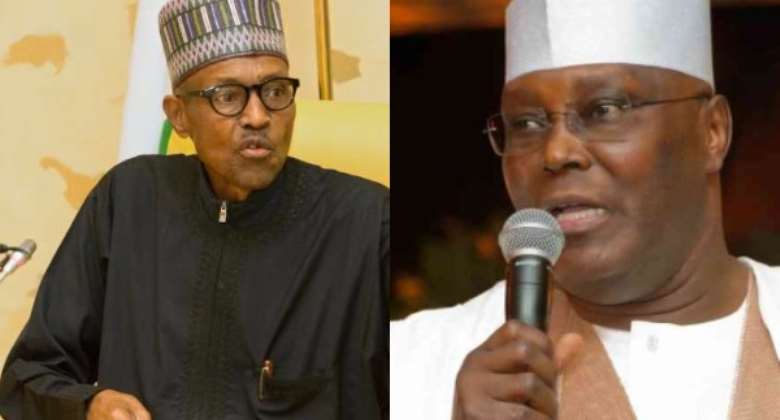 “All the numerous candidates that are contesting the 2019 presidential election are capable and qualified to lead Nigeria except President Buhari.”

In 2015 I warned Nigerians about the catastrophic danger - like many did – in voting a coupist, a tribalist, a religious bigot and a man who has no respect for human rights and rule of law like Gen. Muhammed Buhari against a well refined, well-informed and a capable democrat like Dr. Goodluck Jonathan, but the majority of Nigerians did not only make that mistake of not heeding to the advise but they equally helped Buhari – wrongly or rightly - in many ways they could that foisted him on us Nigerians as our president. I cautioned that the choice we had had between Jonathan and Buhari was “a choice between a democrat and a dictator.” I added also that “It would be a disaster if Buhari should be elected the president” of the Federal Republic of Nigeria. A similar scenario is here again.

Nigeria’s economy was the third fastest growing in the world under Jonathan, and under Buhari Nigeria won the award as the capital of poverty in the world. Nigeria’s security is at its lowest ebb.

In exception of the civil war period, Nigerians have never been divided, killed, massacred or murdered with impunity like they are now under this brutal leader called Buhari. International experts who are well equipped to sniff out corruption wherever it may hide have declared Nigeria as too corrupt compared to Jonathan’s government, but yet this shameless and negatively predictable government keeps on deceiving gullible Nigerians with propaganda and lies.

The economy of Nigeria has never been witnessed to be as bad as it is today under Buhari. People are in pains and hungry as exchange rate fluctuates now between N350 – N400 per dollar, even though Buhari promised to make naira to equal dollar during his campaign in 2015 - when a dollar was exchanged between N185 – N200.

Buhari in his efforts in 2015 to win many gullible and myopic Nigerians that regrettably included some sound professors to believe his deceits in 2015 hypocritically criticized Jonathan heavily for subsidizing petroleum products. In his words, he said and queried, and I quote, “… If anybody says he is subsidizing anything he is a fraud. … Who is subsidizing who?” But he did not only cunningly continue with the subsidy policy, but his expenditure on subsidy rose around May 2018 up to N2.4 billion daily, and has proposed N305 billion in the 2019 budget according to reports. Owing to Buhari’s personal statement above; will it be wrong if I say, “he is a fraud”? Honestly speaking, I really don’t know where they got the integrity they tagged on Buhari. In the face of these awful and monumental failures - from security, economy to corruption etc. – these political gangsters who are inconsiderably very greedy and cruelly selfish, have again packaged this incapable president that has parochially directed the affairs of Nigeria that rapidly crippled the country to ridicule as the sleeping giant of Africa. It is even more disappointing to see Buhari supporters who are not APC members who acknowledged that Buhari failed in his three cardinal electoral promises on security, economy and corruption but that he must continue, because he is a good man. It is so idiotic to base one’s argument frivolously like this.

• Why Atiku is the right candidate now
All the numerous candidates that are contesting the 2019 presidential election are capable and qualified to lead Nigeria except President Buhari. But only Atiku Abubakar and PDP has all what it takes to defeat Buhari and APC. The reasons are simply not far-fetched.

PDP as a party that governed Nigeria for 16 years is the most ruralized party in Nigeria – many old, young, illiterate and literate Nigerians in villages know PDP - and Atiku for these 16 years of PDP reign was the vice president for eight years. Succinctly, PDP has the structure nation wide and has a man in Atiku who is well experienced and also highly connected beyond religion and ethnicity considering his personal family make-up, and you cannot say the same thing about the other political parties and their candidates. Atiku will unite Nigerians once more and get Nigeria working again.

• The mistake Nigerians should not make again
It will be a grave mistake in this country again if President Buhari is allowed to continue to govern Nigeria under any guise. Evidence shows that he is not at the right frame of his mind and not in control of his government.

Importantly any vote to another candidate/party that is not Atiku/PDP is not only a shared and a wasted vote, but also another support to desperate, oppressive political cronies and cabals who will invisibly operate through a tyrant. Remember what Aisha, Buhari’s wife said. She told Nigerians openly that only two or three people are ruling Nigeria today, and charged Nigerian men to wake up, face the challenges and to stop licking the boots of these people and take Nigeria back from them. What else do you want to hear before you will understand that something is wrong? Are you going to be more Catholic than the Pope? Or do you think that you will know Buhari better than his wife Aisha? Wake up Nigerians and vote wisely.

Again and in nutshell, if you really want Buhari out of power vote Atiku/Obi because any vote to another candidate is a plus for Buhari.

• What PDP must do
If you check how many states Buhari won against Jonathan in 2015 and check today whether the people of those states will be willing to vote him this time around, you will know that this election is already won and lost.

Benue people gave Buhari their votes in block in 2015. Do you believe that it will be the same this time around knowing what the people are going through in the hands of herdsmen? Kano State voted in block for Buhari also; do you see that happening like it happened in 2015 especially with a political heavy weight like Kwakwanso and co now in PDP? With Aminu Waziri Tambuwal as the governor of Sokoto State and in PDP, do you equally see Buhari sweeping Kano like he did last time etc.?

PDP just need to do their homework against rigging very well and victory is assured.

Atiku and PDP do not sleep because APC people are very desperate, but you are capable of matching them, power to power.