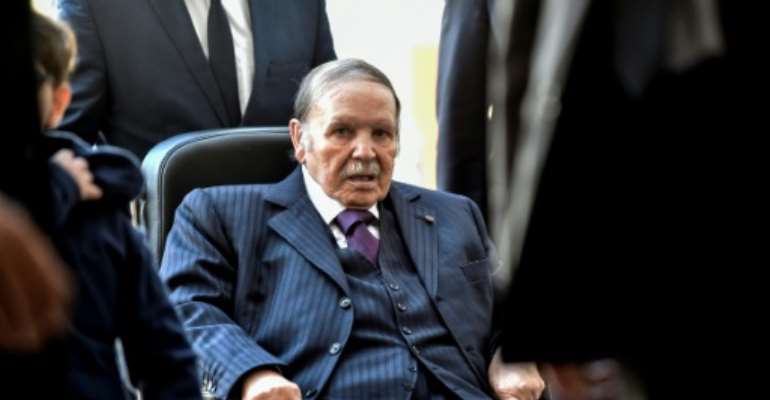 In power since 1999, 81-year-old Bouteflika uses a wheelchair and has rarely been seen in public since a stroke in 2013. By RYAD KRAMDI (AFP/File)

Algeria's ailing President Abdelaziz Bouteflika is to seek a fifth term in April elections, state media announced Sunday, despite health issues that have kept him largely out of the public eye for years.

The 81-year-old head of state, in power since 1999, declared his widely expected candidacy in a message to the nation that Algeria's official APS news agency said it would release later the same day.

The president said he would set up an "inclusive national conference" to address "political, economic and social" issues and "propose an enrichment of the constitution", APS reported.

Bouteflika, who uses a wheelchair and has rarely been seen in public since suffering a stroke in 2013, had remained quiet about whether he would be a candidate in the lead up to the April 18 poll.

The country's ruling coalition -- which includes the president's National Liberation Front -- lent its backing to Bouteflika earlier this month.

Prime Minister Ahmed Ouyahia has said Bouteflika's health was not "an obstacle" to performing presidential duties.

Retired general Ali Ghediri, 64, was the first to announce his candidacy after the presidency set the election date.

Algeria's main Islamist party, the Movement for the Society of Peace, will also take part, backing its candidate Abderrazak Makri. It has said Bouteflika would be unable to handle the demands of another term in office because of ill health.

The country's oldest opposition party, the Front of Socialist Forces, announced on January 25 that it would not field a candidate and called for an "active, intensive and peaceful boycott".