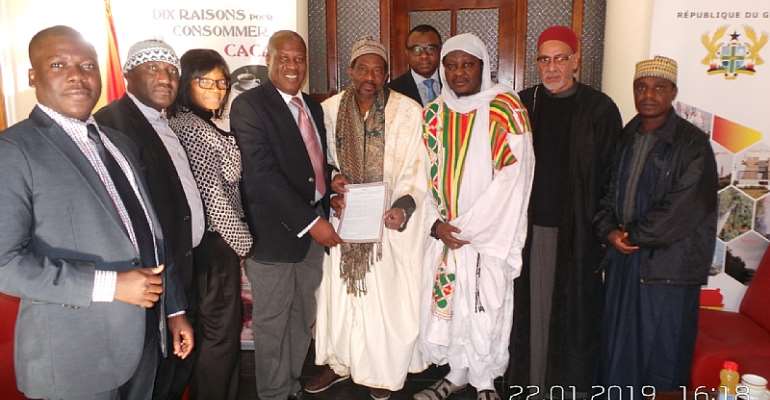 The Supreme Leader of World Tijanya Sidi Ali bin Arabi Al-Tijani has again conferred on the President of Tijaniya Muslim Council of Ghana the supremacy status of the leadership of Tijaniya in Ghana.

He also put upon him the sole representative of the Supreme Successor of world Tijaniya in Ghana.

The event took place at his Aina Mahdi Palace in Algeria when Sheikh Khalifa led a five-member delegation to Algeria.

In an interaction with the world Leader of Tijaniya an Administrator in the office of Khalifa, Sheikh Mutawakilu Iddriss expressed the Councils appreciation to him for attending the 2017 celebration of the life of Sheikh Ahmed Tijani in Ghana.

He also used the opportunity to inform him about the up-coming 2019 Qur’an recitation for Peace, scheduled to take place on the 6th of March, 2019 at Prang in the Brong Ahafo region of Ghana.

Khaliat -Amm welcome Khalifat- Akbar and his entourage for a successful trip to Aina–Mahdi, Algeria. Sheikh Ali bin Arabib Al-Tijani praised his hard work and determination. He entreated him to do more in propagating Islam and Tariqa Tijaniya. In recognition of Sheikh Khalif’s great commitment to the job, the Supreme successor of world Tijaniya certified his effort with a citation which crowns him as the leader of Tijaniya in Ghana.

On his part, Sheikh Abul-Faidi Ahmed Abdulai Maikano showed his appreciation for the honour done him and promise to work assiduously in attracting more people into the faith. Subsequently, the entourage toured some historical sites including the very room in which the initiator of Tijaniya order was born in Aina Mahdi, the tombs of his parents, friends and successors.

Kasar Kurbani is the place where the third successor Sidi Ammar Al- Tijani was buried so was his French wife. The entourage also went to Kasar Bousangou where the Sufi order Tariqa Tijaniya) originated and also witness a small rock with water gushing out which serves as the source of drinkable water to the surrounding communities. Another rock which also supplies potable water to the people of Shalala Gibiriya and nearby towns both was stroked with a rod by Sheikh Tijani.

The Ghana Ambassador to Algeria Nana Kwesi Arhin welcomes Sheik Khalifa and his entourage to the embassy and had a fruitful discussion. Ambassador Arhin expressed his gratitude and advises both Muslims and Christians to continue to live together in peace and harmony for the development of the nation.

Sheikh Khalifa prayed for him, the staffs and Ghana at large for Allah’s guidance and prosperity. The executives of the Ghana Union in Algeria led by their chairman Alli were next to meet with the Tijaniya supreme leader of Ghana at the embassy.

He prayed and advises them not to engage themselves in any dubious act that may put them into trouble and is possible of tarnishing the image of Ghana.

The next visit took the entourages to the ministry of religious Affairs of Algeria and met with the minister Mohammed Eissa. Sheikh Mutawakilu Iddriss outlined the efforts exerted by the Tijaniya Muslim Council of Ghana in propagating Islam and Tariqa Tijaniya, pointing out the success and challenges attached to this worthy course. He highlighted the plans on projects and activities for the youth of Ghana in the field of education and Vocational Skills training, Sheikh Mutawakilu underscored the need for cooperation and supporter in making these intentions materialise.

Sheikh Khalifa appreciated the minister for the audience given him and his members out of the minister's busy schedule. He showed to him the certificate of citation awarded him by the Supreme Successor of World Tijaniya, Sidi Ali Bin Arabi Al-Tijani. Minister Eissa expressed his gladness and gratitude to the visitors and promises to work hand in hand with the council.