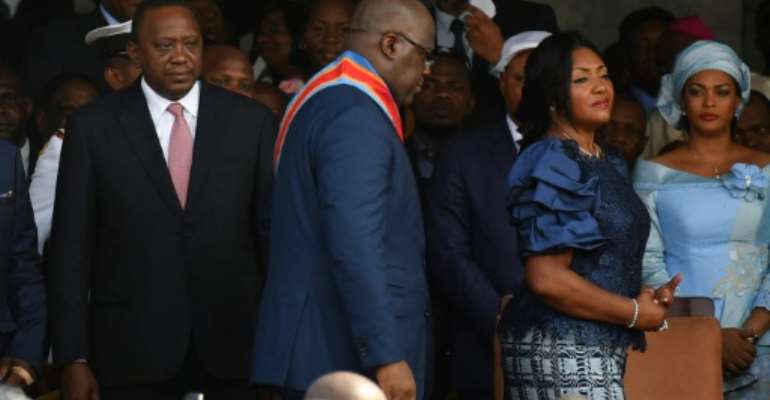 Kenya's Uhuru Kenyatta, seen next to Felix Tshisekedi at the latter's inauguration last month, offered to share lessons learned from his own country's past political tensions as Tshisekedi looks to forge DR Congo's future after his disputed poll win. By TONY KARUMBA (AFP)

Kenyan President Uhuru Kenyatta on Wednesday offered to train DR Congo civil servants, as he expressed his country's commitment to political stability during a visit by President Felix Tshisekedi.

The new DRC president is on his maiden tour which has already taken in Angola and will end in Congo Brazzaville, since his inauguration last month following a hotly disputed election.

In Nairobi he held separate talks with opposition leader Raila Odinga and Kenyatta, who have grown close and are working to promote peace after a dramatic 2017 election that left at least 92 dead, according to rights groups.

Kenyatta told Tshisekedi that Kenya had learned valuable lessons from past political tensions, which it was willing to share, his office said in a statement.

"We will continue to help you achieve peace and stability because we have had similar experience which we can share," he said.

"We are ready to partner in building infrastructure, sharing skills in extractive industry and in many other areas of mutual benefit," he said.

Kenyatta also called for the deepening of trade ties.

Tshisekedi's inauguration after December polls marked the first-ever peaceful transfer of power since independence from Belgium in 1960.