Some Samaritans Worthy Of Appreciation In Little Isaac Amputation Story 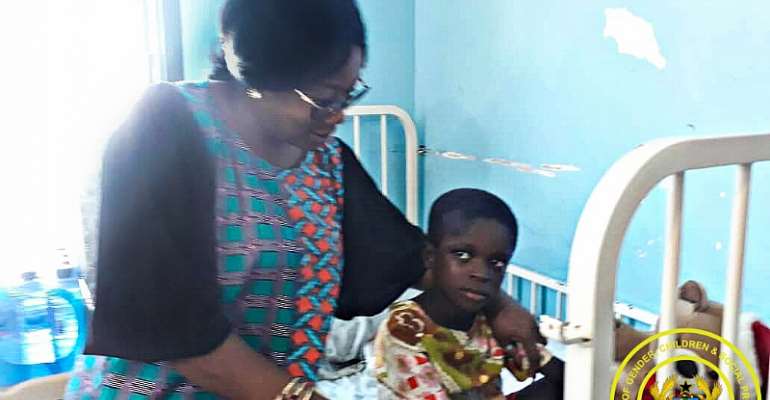 We have all had a cause to express a deep sense of surprise and hurt when the story of Isaac Mensah broke concerning the abuse his stepmother subjected him to, which resulted in the amputation of his left arm.

When the news break and it become sensational a lot went on, but in such cases hardly do we really get to know and appreciate some actors who become pillars to see such issues get answers and support.

Even though it was a woman who subjected Isaac to this inhumane abuse, some women also became the agents of support in Isaac's ordeal.

Madam Adjoa Nuawa discovered that Isaac left hand was in some filthy stinging rags when he came asking for food.

She gave him food and caught him to soak the hand in the water to get rid of the rags and that was when the severity of the damage showed. She did not rest on it and quickly sent Isaac to the Abura Asebu Kwamankese NCCE office.

The bereaved district director of NCCE Madam Ellen Osei who is mourning her departed husband and preparing for burial in her black cloth could not sit on this gory ordeal so she reported the case to the police and equally spearheaded for Isaac to get swift medical attention at Interbeton hospital in Cape Coast.

With the help of the police, they scouted for Isaac's dad to have him sign for the surgery to take place immediately. She was thick in all that happened to give Isaac the best of care.

When Hon. Elvis Morris Donkor MP and Hon. Felicia Aba Hagan DCE of AAK respectively heard of the story, they responsibly contact madam Ellen and rushed to the hospital after the surgery was done. They supported in cash and kind, which is to cater for Isaac recovery process. I must day the NGO who came in with support deserve mentioning.

The gender minister's gesture is worthy to mention because the issue of caring for Isaac after he gets discharged from hospital became an issue. But she stepping in to adopt Isaac and promising to sponsor his education is a thick icing on the cake.

The doctor and the hospital staff who gave the little boy the expert care equally deserve mentioning. Also to all who in diverse ways supported this cause I salute.

The typical Ghanaian spirit of fellow-feeling and high sense of neighbourliness was fully at play.

May we all in our small way, aid many Isaac's we have around.

The Writer Is A Transformational Coach And A Concerned Citizen