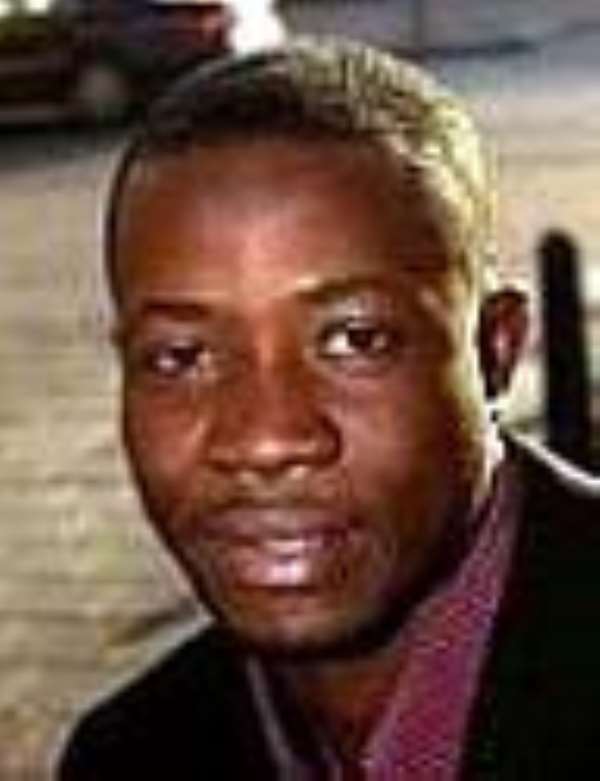 ESSEKU BUBBLES WITH SUSPICION …Lord Commey, others on the line MR. HaRONA Esseku, the embattled National Chairman of the ruling New Patriotic Party (NPP), has raised suspicion about his entrapment in a 'loose-talk' saga that has tainted the seat of government with corruption. He was reported to have alleged that funds meant for the running of his party, known in media circles as "kickbacks", had been highjacked by the Castle, the seat of government.

He has however denied ever saying so.Nevertheless, the Editor -in-Chief of The Enquirer newspaper, Mr. Raymond Archer, who broke the story, insists that Mr. Esseku stated so, which statement is captured on tape and would be played by at least two radio stations, Joy FM and Radio Gold, both Accra-based radio stations today.

Speaking in an interview with Hello FM, a local radio station in Kumasi at the weekend, Mr. Esseku stated that he would not rule out the possibility that his own party members might have ambushed him in order to torpedo his ambition for re-election as national chairman.

According to him, in the initial stages, he doubted any suggestion to suspect his party for the entrapment, but alluded to it last Friday afternoon, after Joy FM played a tape about a conversation he (Esseku) had with David Tamakloe of The Enquirer newspaper.

"In the beginning, people suggested to me that it could come from within, but I doubted my party could do this to me. As I sit here talking, I'm very much suspicious with 40% belief that there are more people to the scheme than the two men," the embattled chairman told his host.

He continued that it could be some members of his party, sitting afar, who might be pulling the stripes or other people outside the party but he does not know for now.

Mr. Esseku, who is now in doubt about the credibility, loyalty and sincerity of Mr. Lord Commey, the NPP's National Organizer, to him, said he could be among those suspects because he (Commey) introduced the duo to him as friends in the media.

According to him, it is true that he had expressed worry about diversion of monies supposedly meant for the running of the NPP, but what he said had been misconstrued and misreported, and that is why he insisted on seeing the script before the publication.

He however failed to tell the public more about the money, but said it was money from NPP contributors who had been supporting the ruling party even during the opposition days, adding that he would not say anything further until his 'loose-talk' tape was played to his hearing.

Even though he said he had wanted to go public with his criticism, supposedly to improve the running of his party, the time it was brought out by the newspaper was not appropriate and branded that as mischievous.

In his view, Archer and Tamakloe were used to pursue an unknown agenda of some people he considered to be his political detractors, hence, the recordings of all conversations he had with the duo.

Meanwhile, Mr. Lord Commey, speaking through the same medium, declined to comment on the core issues of the scandalous saga, indicating that they, the national executives of the NPP, together with President Kufuor, had met and talked about the issue.

He promised to come out when the time is due for an explanation and concluded that all the party gurus, including Mr. Kufuor, best know the genesis of the issue.

"God didn't create women to stress themselves; women must no...
27 minutes ago