Places To Visit In Ghana That Aren't Accra 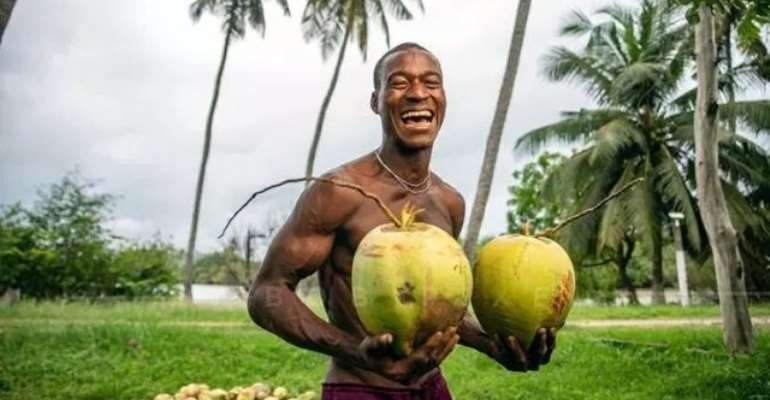 August 2019 will officially mark 400 years of the start of the Transatlantic slave trade, an act which crippled African nations and dispelled black people into the Caribbean, West Indies and America. In commemoration of the event which has been described as humanities greatest injustice against black people, Ghana’s President, Nana Akufo-Addo has declared 2019 as the “Year of Return” for people of African descent in the Diaspora.

The aim of this initiative is to bridge the relationship gap between Africans and their brothers and sisters living in the Diaspora as well as helping them retrace their roots.

One of the highlights of the “Year of Return” will be a boost in tourism as already heralded by a CNN 2019 Travel article which placed Ghana as number 4 on the top destinations to visit this year.

As well as the 2019 edition of the Pan African Historical Theatre Festival (Panafest), which attracts throngs of Black people biennially.

Ghana is a beautiful nation and the country which is sometimes called the gateway to West Africa has some of the world’s most beautiful beaches, green national parks, historic castles/forts, rocky mountains that need exploring.

However, you’ll find them outside the country’s noisy and bustling capital, Accra.

Accra is a great developing city by all standards but if you want to experience and enjoy Ghana, here are ten of the best places to check out on your Ghanaian tour. 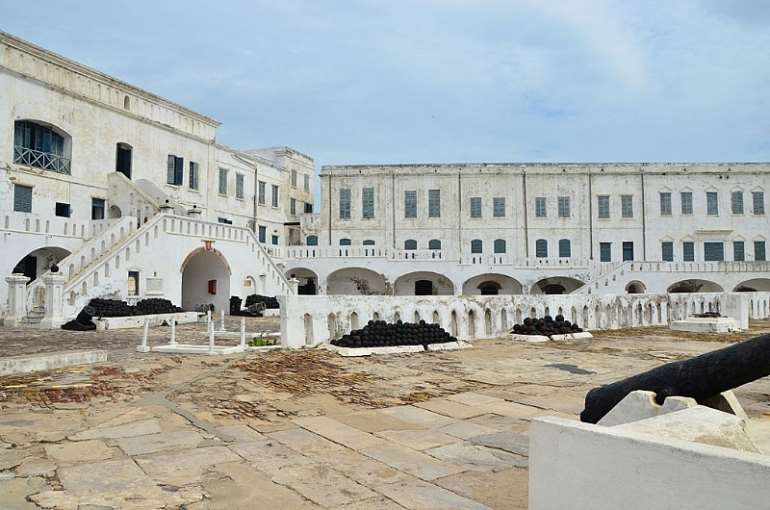 A designated World Heritage site by UNESCO, (the UnitedNations Educational, Scientific and Cultural Organization, the Cape CoastCastle, located in Cape Coast, Ghana’s former capital, was built by European traders in 1653 for commercial and housing purposes but was later used in transferring slaves from all over West Africa to Europe and America’s. 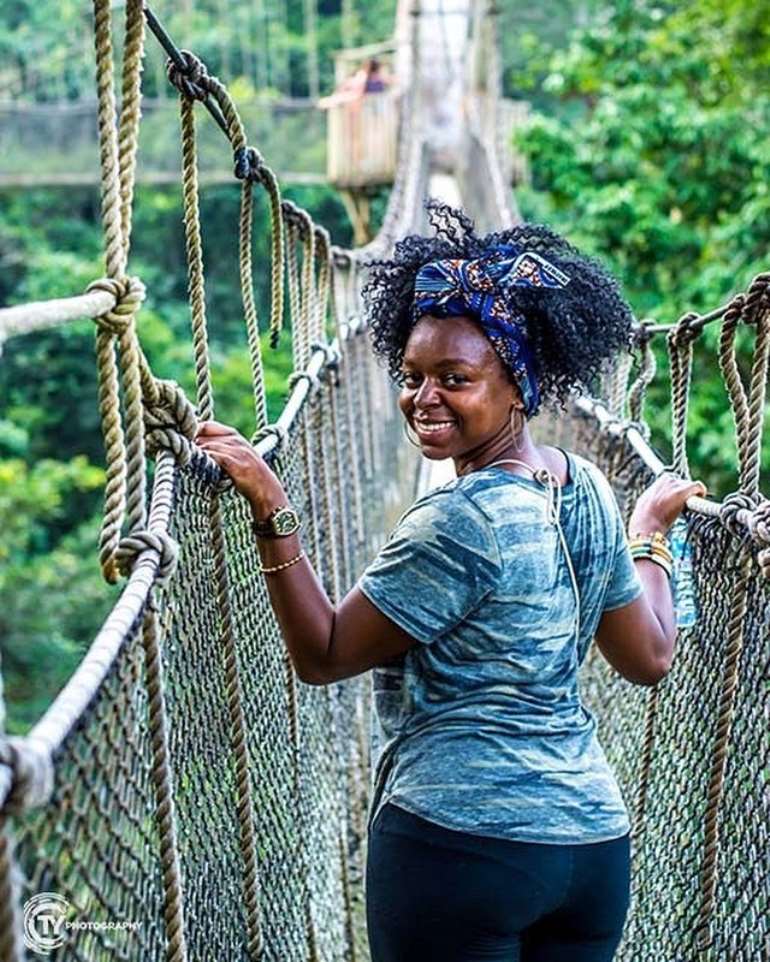 Considered as one of Ghana’s finest wildlife and rainforest reserve, the Kakum National Park lies on the coast of Ghana on the Twifo Prasoroad, a few kilometres from the Cape Coast town. According to conservationists, the park is home to several endangered animal species including the Diana monkey, grey parrot, hornbills and butterflies. Its most popular attraction is the Canopy walkway which is suspended at 30 meters above sea level and an adrenaline rush for all adventure junkies. 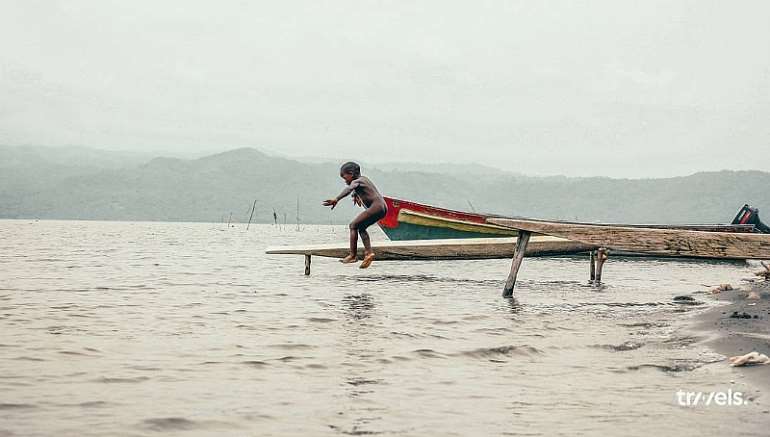 Lo cated in the culturally rich Ashanti region of Ghana, Lake Bosomtwi is Ghana’s sole natural lake and believed to be in the region of an ancient impact crater about 10.5kilometers in diameter. The Asante tribe who inhabit the area close to LakeBosumtwi regard the lake as a sacred lake. Asante oral tradition states that the souls of the dead come to bid farewell to Asase Ya, a deity revered by this tribe. This explains why only wooden planks are used in fishing in the lake. Over 70,000 people live in the30villages surrounding the lake and provide for a thrilling tourism adventure and interaction with local people 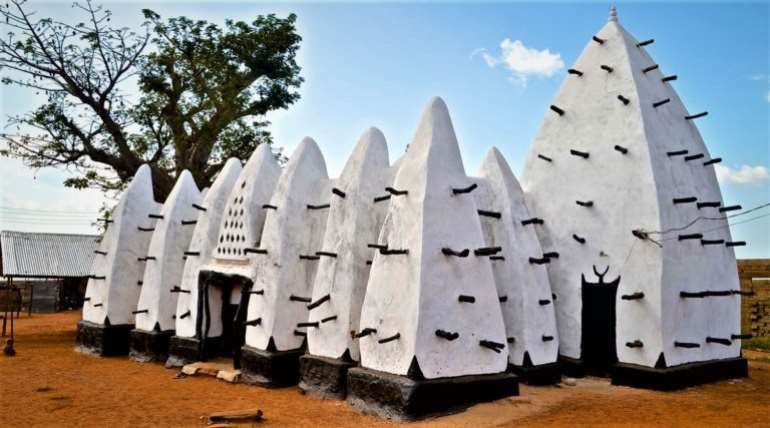 The Larabanga mosque was founded in 1421, by an Islamic trader who goes by the name of Ayuba. According to traditional folklore, Ayub had a dream while staying near a “Mystic Stone” which directed him to build a mosque. It’s Sudanese architectural style as well as it mud-plaster construction lends it a unique aesthetic and is also the oldest mosque in WestAfrica. However, due to poor restoration works it’s undergone in the past, the mosque is currently listed as one of the 100 Most Endangered Sites. Other interesting artefacts in the mosque is an old Quran believed to be a gift from heaven in 1650 to Imam Bramah. You can pick some handmade raffia bags, shea butter and other beautiful crafts from local artisans who live in the Larabangavillage 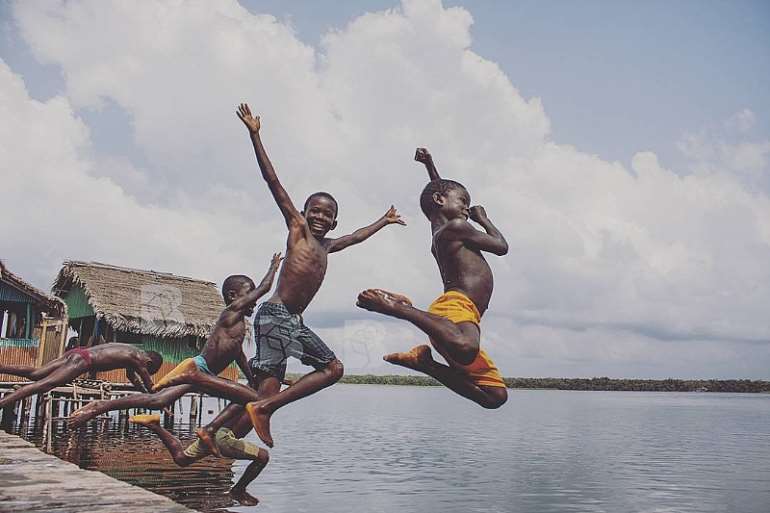 The village of Nzulezu celebrates local architecture and Ghanaian design as it sits on stills on Lake Tadane. The structures are made up of wood and raffia with a central walkway and houses located on either side.

You can only get to Nzulezu via a canoe which will take about an hour or 5kmand will be welcomed by the head of the village. Nzulezu hangs 5ft above the lake level with a school and a church all located in the community. It was added to the UNESCO World Heritage Tentative list on January 17, 2000, under the cultural section for its contribution to anthropology and being one of the few remaining structures of this nation. 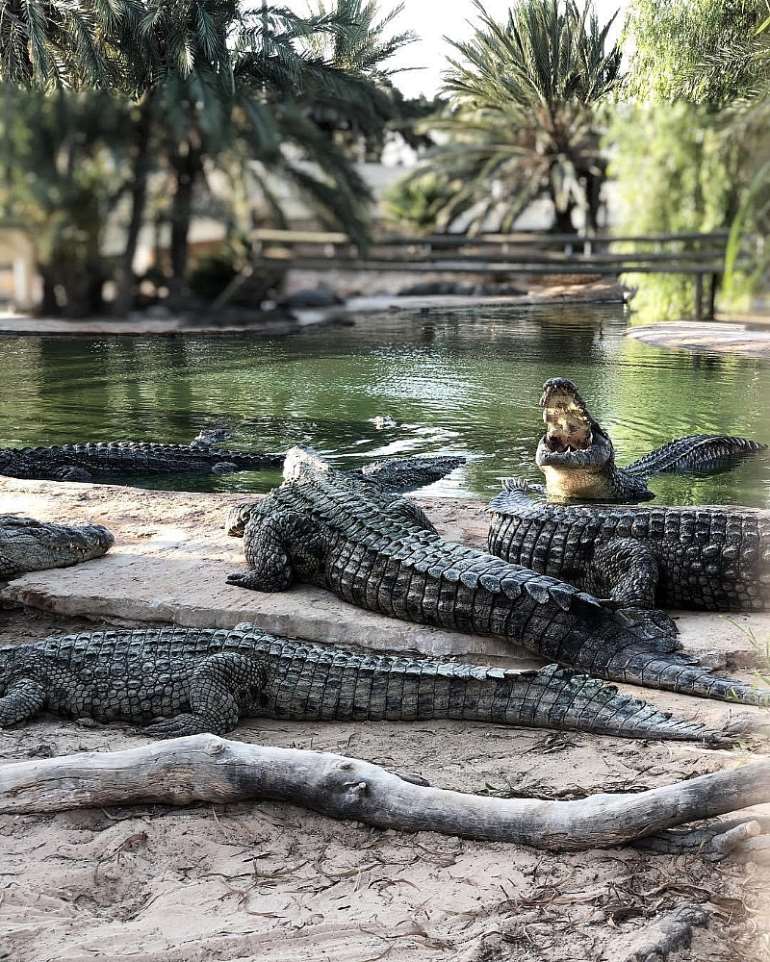 Another body of water considered as sacred is the Page Crocodile pond in Paga, Upper East Region Ghana. As the name implies, it is home to several species of West African crocodiles with some ageing up to 90 years old.

It is noted for the friendly and tame nature of the reptiles; tourists have the rare opportunity of touching, sitting and taking photographs with the animals on land. The people of Paga believe that their souls reside in the crocodiles as such it is taboo to harm or kill crocodiles in Paga. 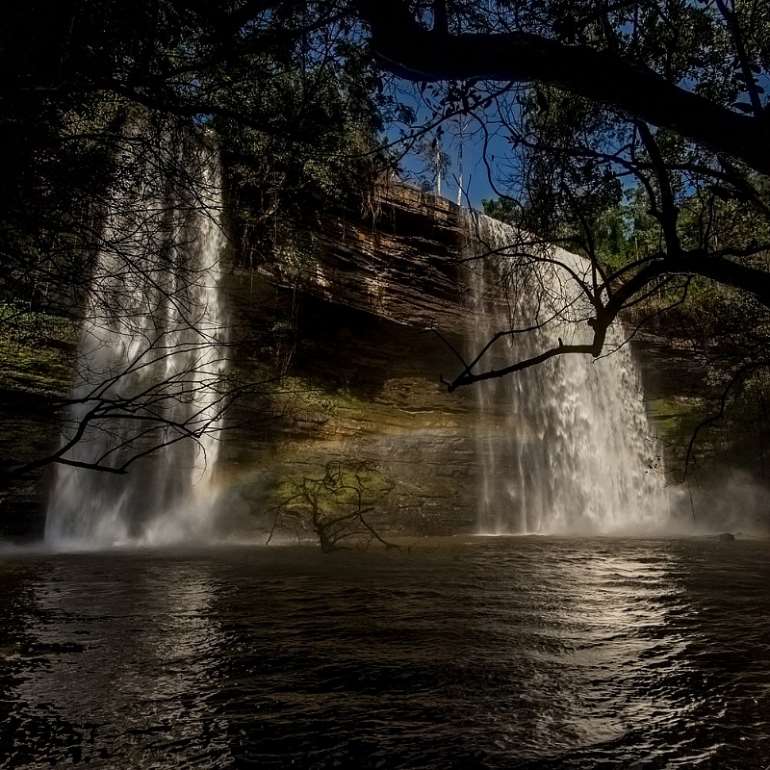 The Boti falls is some 17km North-east of the Eastern regional capital, Koforidua. The twin waterfall which is also known as male and female by locals can be found at Boti in the Manya Krobo district. It is a popular site by revellers and tourist alike who love to have a swim surrounded by thick mangrove forests.

It’s also a top destination for music videos and movies, who knows you might be your celebrity crush out there. Another feature at the Boti Falls is the Umbrellarock located at the waterfall grounds, a natural rock formation which overlooks the Eastern region valley.

Shaped like an umbrella, the top rock is larger than the base, however, it is able to hold it firmly and safe for humans. 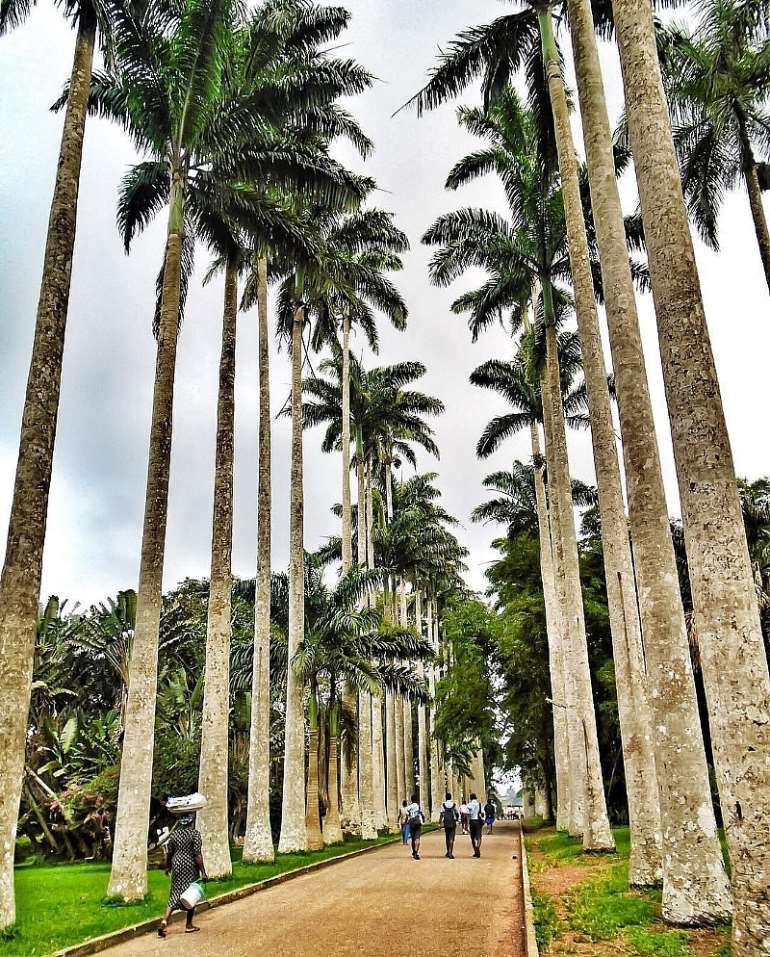 Originally, the site of a Sanitorium for government officials of the Gold Coast, the Aburi Botanical garden was officially opened in March 1890 by the colonial government. The 64.8-hectare garden has played a vital role in Ghana’s cocoa and rubber production. It’s also home to a number of flora and various plants. The garden is a favourite among Ghanaians who love to move away from the noise and pollution if the big cities while embracing nature. 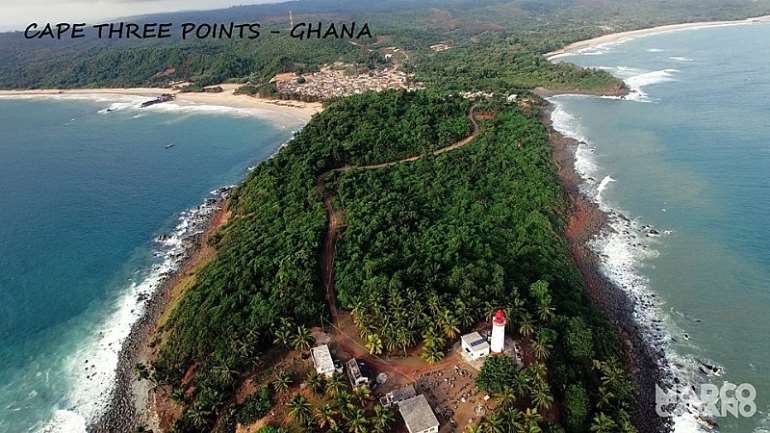 Travelling to Ghana without visiting the Cape Three Point will be a travesty. Known as the” land nearest nowhere” by geographers and anthropologists, the Cape Three Points is a tiny peninsula located between the towns of Dixcove and Princess Town. It also marks the western end of the Gulf of Guinea (Check it out on your map). Aside from the coconut tree and stunning view of the sea, its lighthouse is another reason worth exploring the area. Another original structure is currently in ruins and a much bigger and new which was constructed in 1921 still acts as an aid to ships moving through that route 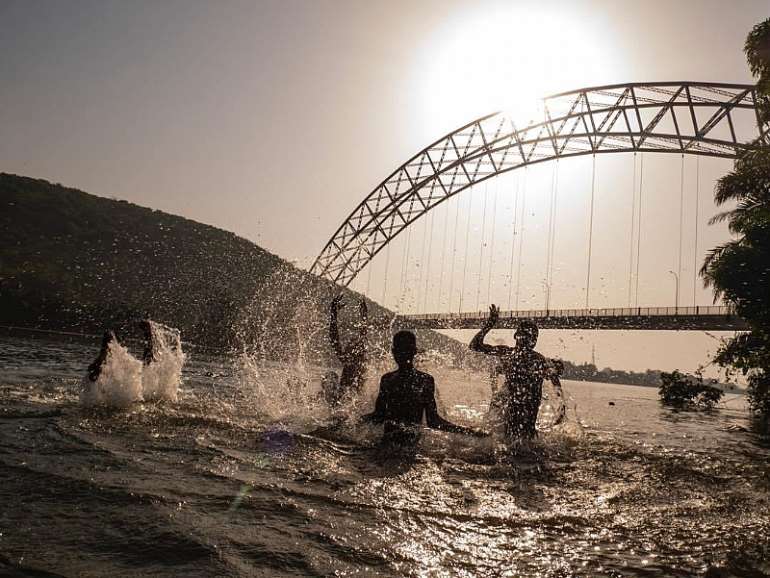 The Adomi Bridge spans the Volta River, south of theAkosombo Hydroelectric Dam. It was designed by British engineer, William Christopher Brown in 1956 and completed in 1957. The Akosombo Dam provides the majority of Ghana’selectrical power and its construction led to the creation of Lake Volta, the largest man-made lake after huge flooding during its construction. 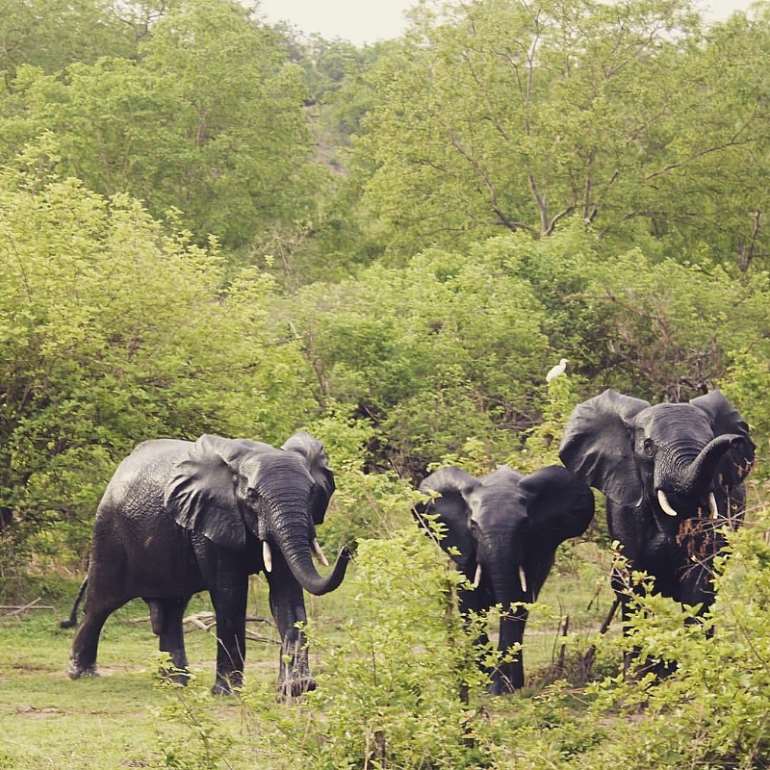 Up north, you’re sure to find the Mole National park which is also Ghana’s largest wildlife Safari (Yes you don’t have to go to theSeregenti in East Africa to experience wildlife). Close to the Larabanagavillage, the park is home to two rivers; Lovi and Mole, over 93 mammals as well as a large area of savanna grassland. It is home to rare flora species including Burkea Africana, Isoberlinia doka and Terminalia macroptera. The Zaina lodge is also located close to the park offering you a 5-star hotel experience in the wild. You can always come back from your Mole trip with a bottle of honey made from flowers in the park by local people.

Other Notable places to visit are

Elmina Castle and other forts