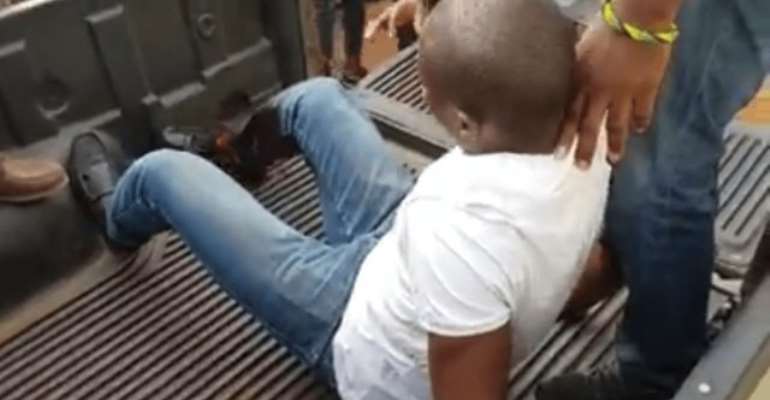 Let me begin by first congratulating the youth wing of the National Democratic Congress for their success in swiftly organizing a press briefing to express to Ghanaians how displeased they are, in relation to the recent 'uncivilized' occurrences that has caught the attention of all, including the global world. In no terms of partisanship, the unprofessional conduct of some security personnel that nearly interrupted the Ayawaso Wuogon bye-election should be condemned. Notwithstanding, the camouflaged pulling out from the contest by the NDC is poor, undirected and misguided. The leadership of the party should bow their heads in shame for failing their followers.

On the more substantive issue which has triggered this rebuttal, I would begin by expressing so much disappointment in the press statement delivered by the leadership of the NDC's youth wing. It is despicable for the youth wing of the NDC, once again to cook and hastily serve one-sided propaganda in the event of the Sammy Gyamfi - Nana B near brouhaha. To openly claim that the attack on Comrade Sammy Gyamfi was "unsolicited" and "unprovoked" is like telling us, who have had the opportunity to watch the excerpt of the 'Ekosii Sen show' on Asempa 94.7FM and to listen to the boorish utterances of Comrade Sammy are "fools". Not in any way to justify that the attack was right, I suggest that it would have been proper to equally highlight the clownishness of Comrade Sammy Gyamfi, the merit to which the condemned attack was triggered.

Next time, in an unwished-for event such as that which has happened, deem it important to also tell the general public what transpired in that a supposed act of "thuggery and violence" was exhibited by the "bandits". That, if done, shall serve a good grounds for a reasonable debate other than a looping one.

You also suggested in the third paragraph of your shabbily dressed press briefing, a kind of condemnation in no uncertain terms the attack meted on your maverick national communication officer. To say you were condemning in "no uncertain terms" or simply put "no iota of ambiguity" yet failed to secure space to condemn the verbal attacks meted out to Patriots Henry Nana Boakye and Hon. Collins Owusu Amankwaa by your national officer is a consistent act of failure in objective analysis and communication.

Your fourth paragraph, as part of your usual gymnastics sought to attach and attack the office of the President to the quite unfortunate incidents we've experienced in recent days. That's a usual thing so I would try as much as possible not to comment because Ghanaians have till now known it's "NDC-like" to draw in the name of the President Akufo-Addo in almost everything including the constant barracking of the NDC's Presidential flagbearer aspirants. Wither soever my silence on this paragraph may be, permit me to say and reiterate that, as a student of politics and history, I don't need an Albert Einstein or an Aristotle or a Prof. Lumumba to convince me that governance under the two years Akufo-Addo's government is adequately better and would go down in the archives of political history as most goal oriented and directional government. In as much as there are yet many things to consider especially as regards strengthening of security, we cannot afford to lose focus that Ghana, our beloved country is working again.

Your fifth paragraph, honestly considered is another showcase of the ever derogatory and violent National Democratic Congress, NDC. The general public, especially for those who have had the opportunity to watch the video excerpts of the Sammy Gyamfi - Henry Nana Boakye clash in the studios of Asempa, it was the use of vulgar language by Comrade Sammy which incited Henry Boakye to "stretch his hand to touch Sammy's head", that which many have described as a slap. Surprisingly, the youth wing of the NDC in their press briefing chose not to learn lessons but to go ahead to call the President of Ghana and his appointees "dimwitted". According to the English dictionary, Dimwitted means being "a stupid and incompetent person".

The youth wing of the NDC, in an attempt to condemn a physical attack which resulted from a verbal attack by their own national communication officer goes ahead to say the President of the Republic of Ghana, H.E Nana Addo Dankwa Akufo-Addo is "a stupid and incompetent man" and so are his appointees. In any case, what relation does the President and his appointees have with the incident that took place in the studios of Asempa FM. Note that, Nana B, the one who allegedly assaulted Sammy Gyamfi is not a government appointee. I conclude that, the NDC therefore only used the incident as a mere cover up to organise a press briefing to insult the President of the land.

In as much as I outrightly condemn the unprofessional conduct of security personnel at the Ayawaso Wuogon bye-election as well as the provoked and solicited touch of the head of Comrade Sammy Gyamfi's head by the national youth organizer of the NPP, I also urge members of NDC to reshape their thoughts and give counsel to the likes of Sammy Gyamfi, Edem Agbana, Brogya Gyemfi, Otukunor, Kwakye Ofosu, Appiagyei (Member, Ashanti Reg. Communication Team, NDC), and the 'babies with sharp teeth'. We may agree that the NDC is not an elite party but we cannot agree to say that there are no elites in the NDC. These elites in the party must rise to the standard of elitism and call to order the baby legends from the shadows of their violent roots.

Let me, however, end by petitioning displeasure in the despite 1 out of 137 electoral disturbance at the near La Bawelashie electoral area. The event wasn't proper nor befitting of a nation that prides itself as a democratically free state. The location, whether or not it was at a polling station should be condemned by all. Nonetheless, Ghana is surely working again under the able leadership of H.E Nana Addo Dankwa Abudani Akufo-Addo.