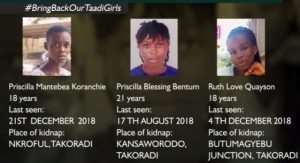 Another suspect has been picked up in connection with the kidnapping of the three Takoradi girls, according to Minister for the Interior, Mr. Ambrose Dery.

“We have picked a second suspect and the investigation is ongoing,” he said in an update to Citi News.

It is unclear what information led to the arrest of this suspect, but Mr. Dery said the main suspect in the kidnappings, Samuel UdoetukWills, has started cooperating with investigators.

“You do know that from the beginning of the investigation, there was a time where the suspect wasn't talking but now the suspect is talking and we are doing all we can within the law to make sure we get the information.”

The Gender and Social Protection Minister, Cynthia Morrison, had also revealed that Samuel UdoetukWills had assured that the girls had not been killed.

She had a meeting with the Nigerian High Commissioner to get assistance for the security service with the investigation process.

“Since the suspect is a Nigerian, I have asked the High Commissioner to go with me and she is willing to do so. He has been supportive and he already delegated his people to go to Takoradi to meet the appropriate authorities. We discussed how we can go and talk to the suspect in his native language. Perhaps that will make him open up to the High Commissioner than he will do to any of us.”

A team of investigators from the United Kingdom and the United States of America are also in the country to assist the Ghana Police to search for the girls.

The girls have been identified as Ruth Quayson, Priscilla Blessing Bentum and Priscilla Koranchie.

The girls went missing between August and December 2018.

In response to anger and despair from some residents of the area, the police intensified efforts to unravel the case.

The Director-General of the CID, DCOP Maame Yaa Tiwaa Addo-Danquah led a delegation last Saturday to visit the families of the three kidnapped girls in separate meetings in Takoradi.

The CID boss said the investigative team on the case had been beefed up and assured the families of intensified efforts to rescue the girls.

Fifteen persons had also been picked up in the Eastern Region over the kidnapping of three girls in the Western Region.

The suspects were rounded up in a swoop by the regional command in the Lower Manya Krobo municipality of the Eastern Region.