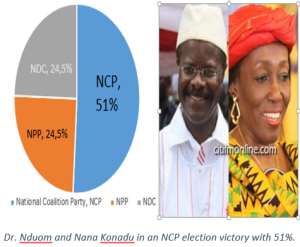 Ghana should no longer be tossed up by the intellectual hypocrisy of both the NPP and the NDC that has led to lawlessness, impunity upon impunity, insecurity and corruption in the country. It is time for all the peanut political parties to merge to form a stronger party that can topple both the NDC and the NPP at polls because of its diversity.

In Germany, Chancellor Angela Merkel’s government won elections and governs the country by a coalition of parties. It is time for Ghana to get a National Coalition Party (NCP). This coalition of parties must feature Papa Kwesi Nduom, Nana Konadu Agyeman Rawlings, Dr. Edward Nasigri Mahama, Mr Gusie Tanor and other gurus to take the affairs of the country from the hands of both the NPP and the NDC. It is possible! It is doable!

We can learn from the examples of Germany, Finland, Netherlands and the Czech Republic who are having coalition parties or governments formed by coalitions. The chart on the left of the picture shows how the proposed National Coalition Party can wrest power from the NPP and its arch rival, the NDC. The NCP will inevitably be a force to be reckoned with in Ghana’s political landscape.

In times when no party gets the simple majority to form a government, the electoral commission and the judicial systems must advocate for parties to form a coalition, instead of a re-run to waste Ghana’s money. Otherwise, we need to reform our electoral laws to allow such coalitions.

The NCP could as well form a coalition with either the NPP or the NDC. In that sense the two main parties in Ghana can no longer practice whatever they like.