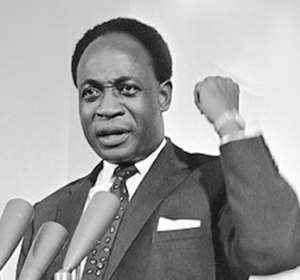 The word “coup” should not be used to describe what took place in Ghana on 24th February 1966, on that day, Ghana was captured by traitors among the army and the police who were inspired and helped by neo-colonialists and certain reactionary elements among our own population. It was an act of aggression, an “invasion”, planned to take place in my absence and to be maintained by force. Seldom in history has a more cowardly and criminally stupid attempt been made to destroy the independence of a nation.

When the action took place, I was on my way to Hanoi, at the invitation of president Ho Chi Minh, with proposals for ending the war in Vietnam.

I had almost reached Peking, the furthest point in my journey. The cowards, who seized power by force of arms behind my back, knew they did not have the support of the people of Ghana, and therefore thought it safer to wait until I was not only out of the country but well beyond the range of a quick return.

The news was brought to me by the Chinese Ambassador in Accra who had gone on ahead to Peking to meet me, and to be with me during my visit to China.

He had just accompanied Prime Minister Chou En-Liu, Liu Shao-chi, and other officials when they welcomed us at the airport, and he had come straight on out to the government house where I was staying.

I remember his exact words:

“Mr. President, I have bad news. There has been a coup d’état in Ghana.”

I was taking a brief rest after the long flight from Rangoon, and wondered if I had heard him correctly.

What did you say?

“Words that Never Die” is a weekly installment of compelling quotes from the world’s most influential people. This week, we highlight an excerpt from Kwame Nkrumah’s book “Dark Days in Ghana.”