Is There A Connection Between The Murders Of Joseph Migal Jakperuk And Ahmed Hussein-Suale? 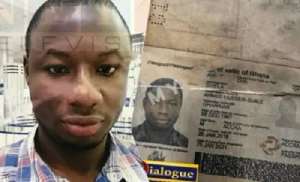 Joseph Migal Jakperuk, a senior staff of the Ghana Water Company Ltd. (GWCL), had a whole magazine of bullets sprayed into his body by cowards earlier this month, leading to his promising life, being cut short.

In a similar fashion, Ahmed Hussein-Suale, a staff of Tiger Eye, was gunned down by ‘identical’ cowards possibly doing the bidding of corrupt, greedy and power drunk monsters parading as responsible members of society.

According to an account by some eye witnesses of the murder of Mr. Jakperuk, that the murderers asked whether he was the staff of GWCL, to which Mr. Jakperuk answered in the affirmative. Bullets were then rained on him by the murderers. Why is it that only Jakperuk was killed and not any of the other members of the entourage?

Another piece of evidence that maybe gleaned from Mr. Jakperuk’s murder, is the narrative that the murderers were 2, one tall the other short. This is where it gets interesting.

With regards to the murder of Ahmed Hussein-Suale, a similar tall and short description of the murderers is given by eye witnesses. Is this just a mere coincidence, or there is a connection between these 2 murders?

There is a politically corrupt cabal in this country whose ambition is to take over the entire country by hook or crook, using threatening and other ungodly methods in a vain attempt to achieve their devilish ambitions. These charlatans must know that no amount of murders can silence a majority of the Ghanaian public. It doesn’t matter how politically connected these murderers are, they would be fished out (both agents and principals) and made to face the law eventually, Insha Allah!

Another line of inquiry the investigators ought to pursue is the allegation by some staff of GWCL that Mr. Jakperuk had an altercation with someone at the workplace who threatened to ‘show’ him.

Death is not something I fear, so the murderers of Mr. Jakperuk and Ahmed Hussein-Suale, maybe closer to me than my mother, however, crime is crime, and no one should get away with unlawful killings, whoever they maybe. Power, wealth and fame does not equate to a license to kill at will!

Any stupid fool, who foolishly believe that their corrupt acts are going to be nipped in the bud by murdering anti-corruption crusaders, need to check into a psychiatric hospital for a comprehensive review of their mental state. The killing of Osama Bin Laden, to say the least, hasn’t ended terrorism, so the deluded and misguided killers of Mr. Jakperuk and Ahmed Hussein-Suale, must take note!