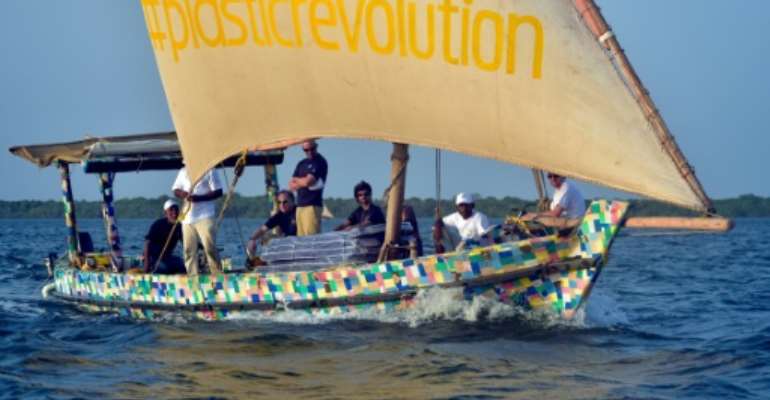 The boat is covered in a brightly-coloured patchwork of 30,000 flip-flops, which like the rest of the raw material was collected from Kenyan beaches and towns. By ANDREW KASUKU (AFP)

A traditional dhow sailing boat made entirely of trash and flip-flops has set off on an expedition along the Kenyan coast to raise awareness about the harmful effects of plastic waste.

Dhows, with their billowing triangular sails, are an icon on the Kenyan coast, having traversed these Indian Ocean waters for some 2,000 years.

On Sunday, the one-of-a-kind dhow, dubbed the Flipiflopi, set off from the coastal town of Watamu for the fourth leg of a 500-kilometre (310-mile) expedition that began on Lamu island on Thursday and is set to finish in Zanzibar on February 6.

The boat is made of 10 tonnes of shredded plastic waste, moulded and compacted to form the hull, keel and ribs with only the mast made out of wood. It is covered in a brightly-coloured patchwork of 30,000 flip-flops, which like the rest of the raw material was collected from Kenyan beaches and towns.

The Flipiflopi was built by hand by traditional dhow craftsmen from Lamu. By ANDREW KASUKU (AFP)

Dipesh Pabari, a Kenyan tour operator and environmentalist who led the project, said the boat was merely a vessel to carry a message about recycling plastic, and how harmful it is, to coastal communities.

"It was never about just building boats, it was a symbol about giving plastic a second life. It is about saying if this material is so amazing that you can make a seaworthy boat, it is really stupid to think about it as single use," he told AFP onboard the Flipiflopi.

Like much of the world, where plastic bottles, caps, food wrappers, bags, straws and lids are made to be used once and then tossed away, Kenya is battling the scourge of plastic pollution, which chokes turtles, cattle, and birds and blights the landscape.

The United Nations Environment Programme estimates that more than 8.3 billion tonnes of plastic has been produced globally since the early 1950s, about 60 percent of which ended up in a landfill, or the natural environment.

The dhow's 500-kilometre (310-mile) expedition began on Lamu island on Thursday and is set to finish in Zanzibar on February 6. By ANDREW KASUKU (AFP)

To accompany the arrival of the Flipiflopi, residents and schoolchildren from Watamu village took to the streets with large bags to pick up waste, while several local associations work hard to keep the idyllic white beaches clean.

With over 12 million people in Africa working in fisheries, and many more relying on fish for their diet, marine debris is a severe threat on the continent.

James Wakibia, who is credited with starting the grassroots movement that saw Kenya ban plastic bags in 2017, was also in Watamu to support the Flipiflopi, which he sees as part of the next step in educating people about the menace of plastic.

Everyone involved in the project was a volunteer, with money coming from their own pockets, crowdfunding and small donations, before UNEP got involved and funded the expedition. By ANDREW KASUKU (AFP)

"Before there was plastic everywhere... it was like a Kenyan flower... right now you can see plastic bottles, but not plastic bags," he told AFP.

'We can live differently'

The nine-metre (30-foot) Flipiflopi was built by hand by traditional dhow craftsmen from Lamu, with low-tech techniques which were honed over three years, but which can now be easily copied, said Pabari.

Everyone involved in the project was a volunteer, with money coming from their own pockets, crowdfunding and small donations, before UNEP got involved and funded the expedition.

Pabari hopes to next build a 20-metre plastic dhow and sail it all the way to Cape Town, South Africa.

"The Flipflopi is living proof that we can live differently. It is a reminder of the urgent need for us to rethink the way we manufacture, use and manage single-use plastic," Joyce Msuya, UN Environment's Acting Executive Director, said in a press statement.

Ghana must not be caught pants down in future, let's find av...
37 minutes ago

Sputnik V saga: ‘Why should I be a subject of ridicule for b...
44 minutes ago