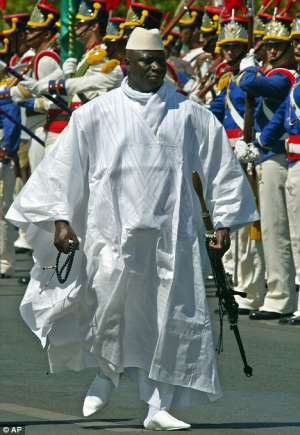 (Geneva, January 24, 2019)--Five United Nations human rights monitors have urged the UN and the Economic Community of West African States (ECOWAS) to release their report on the 2005 massacre in the Gambia of more than 50 Ghanaian and other West African migrants, Human Rights Watch and TRIAL International said today. The killings were allegedly carried out by a paramilitary unit that took orders from then-Gambian President Yahya Jammeh.

Why is this report still being hidden from us? Who are the United Nations and ECOWAS protecting? said Martin Kyere of Ghana, the sole known survivor of the massacre. â€œI want to know who is responsible for all this suffering.â€ Kyere had dodged gunmen's bullets after jumping from a truck that was carrying the detained migrants before state security forces killed them.

The West African migrants, who were bound for Europe, were apprehended and extrajudicially executed after the boat they had boarded in Senegal landed in the Gambia. When news of the killings came out, tensions escalated between Gambia and Ghana, the home country of 44 of the migrants. After Jammeh's government blocked Ghana's attempt to investigate, the UN and the ECOWAS formed a joint investigative team, which produced a report in April 2009 but never made it public.

The Bulletin of the UN Department of Public Affairs reported in 2009 that the unreleased report concluded that the Gambian government was not directly or indirectly complicitâ€ in the killings and forced disappearances but that â€œrogue elementsâ€ in the Gambian security services, â€œacting on their own,â€ were responsible.

However, Human Rights Watch and TRIAL International published a report in May 2018, based on interviews with former Jammeh-era security officials directly involved in the incident, that found that the migrants were detained by Jammehâ€™s closest associates in the army, the navy, and the police, and then summarily executed by the so-called â€œJunglers,â€ a paramilitary unit operating under Jammehâ€™s orders. The Gambian government also destroyed key evidence before the UN/ECOWAS team arrived.

In letters to Rosemary DiCarlo, UN under-secretary-general for political affairs, and Jean-Claude Kassi Brou, president of the ECOWAS Commission, the five UN human rights monitors â€“ the UN Working Group on Arbitrary Detention; the Working Group on Enforced or Involuntary Disappearances; the special rapporteur on extrajudicial, summary or arbitrary executions; the special rapporteur on the human rights of migrants; and the special rapporteur on violence against women â€“ urged them to release the report publicly and deliver copies to the victims and their families. The letters were dated October 30, 2018, but only now made public after no response had been received.

The UN monitors also wrote to the governments of Gambia and Ghana concerning any progress they had made in the investigation of the killings, to â€œencourage efforts aimed at establishing the truth about what happenedâ€ and to ensure â€œthe accountability of any person(s) responsible for the alleged violations.

Jammehâ€™s 22-year rule in Gambia was marked by widespread abuses, including forced disappearances, extrajudicial killings, and arbitrary detention. He sought exile in Equatorial Guinea in January 2017 after losing the December 2016 presidential election to Adama Barrow.

In October 2017, Gambian and international rights groups opened the Campaign to Bring Yahya Jammeh and his Accomplices to Justiceâ€ (#Jammeh2Justice), which calls for prosecuting Jammeh and others who bear the greatest responsibility for his governmentâ€™s crimes.

Following the publication of the Human Rights Watch/TRIAL report on the massacre, several families of the Ghanaian victims called for justice for their relatives. The Ghanaian government announced on May 27, 2018 that it had â€œtasked the Ministry of Foreign Affairs and the Attorney-Generalâ€™s Department to study [the matter] and explore the full extent of its legal and diplomatic implications and also advise the government on the way forward.â€ The government of Gambia has pledged to cooperate with any investigation by Ghana. No concrete actions have been taken since, however.

In addition to Ghanaians, the massacre victims are believed to include citizens from Nigeria, Senegal, Togo, and CÃ´te dâ€™Ivoire. Eight of the migrantsâ€™ bodies were found the day after their arrest on the outskirts of Banjul, the Gambian capital, while the others were killed the following week in Senegal, just across the Gambia border from Jammehâ€™s hometown of Kanilai.

The release of the UN/ECOWAS report would be a meaningful step toward accountability for this horrible crime, said Fatoumatta Sandeng, #Jammeh2Justice spokesperson and daughter of the Gambian opposition leader Solo Sandeng, whose murder in April 2016 galvanized opposition to the Jammeh government. The report could provide key leads and add impetus finally to get to the bottom of what happened.