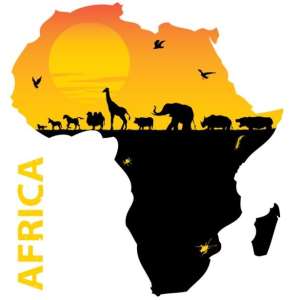 Language and ideas are powerful. They can shape the way we see the world and ourselves. The way we Afrikans see ourself and the outside world is determined to a large extent by the language of non-Afrikans. This language is familiar to us all. It is almost impossible to think about the world outside of the terms of this language. The language I’m referring to is Third World, Undeveloped, Primitive, Poor, and Un- advanced.

A function of these words is to make us feel ashamed. It robs a people of their confidence and blinds them to what is valuable and unique in their societies. They become embarrassed by their traditions and strive in vain to become like the ‘developed’ world.

The success of this language is that we Afrikans not only see ourself in these terms but also we use the same language to describe ourselfs? What does this language do to the minds of a people? What does it do to the confidence of a country?

A Sense of perspective
It is important to remember that traditional and tribal societies have existed for more than 95% of mankind’s existence on this planet. They are the original First World (the word Primitive comes from the Latin Primus meaning ‘first’). This is the way of life in which we evolved. The anthropologist Claude Levi-Strauss believed that a species removed from the environment in which it evolved to live will become pathological. When we look at the levels of drug misuse, alcoholism, depression and other mental illnesses and suicides in the ‘developed’ world, we can see the results of people living in an unnatural environment. Some people in the ‘developed’ world are recognising the strengths of tribal societies, particularly in their ability to care for people in a way that modern society has failed to do.

Poverty
The idea that Afrika is poor, and that it’s poor because it’s underdeveloped, are relatively new ideas. The notion of development, as it is currently understood, was invented by President Truman in 1944. Once you call a country ‘underdeveloped’ the only solution is to ‘develop’ it. The language itself is loaded.

In fact, travelers who first came to Afrika were impressed by the health and nutrition of the people. Mungo Park, wrote that the Gambia River abounds with fish and that nature “with a liberal hand” has bestowed on the inhabitants of the area

“the blessings of fertility and abundance”.

Two 18th century French travellers , Poncet and Brevedent, noted that the Gezira area of the Sudan was once covered in forests and “fruitful and well-cultivated plains”, and that it was called God’s Country “by reason of its great plenty”. We might wonder where this natural wealth has gone.

In this view of the world, the ‘developed’ world seems rather foolhardy. They are like the man who put paper wings on his arms and then jumped off the top of a high mountain expecting to defy the laws of nature and fly. All he was aware of was

the fact that he was still in the air. He thought himself very clever and advanced. He was so dazzled by the feeling of flying that he didn’t notice the ground was getting closer.

The Challenge
Let’s start looking critically at the language we have been given to describe Afrika. Let’s find new words based on true Afrikan perspectives. In doing so we will redefine the power relationship between Afrika and the rest of the world and help to create a new sense of pride in being Afrikan.