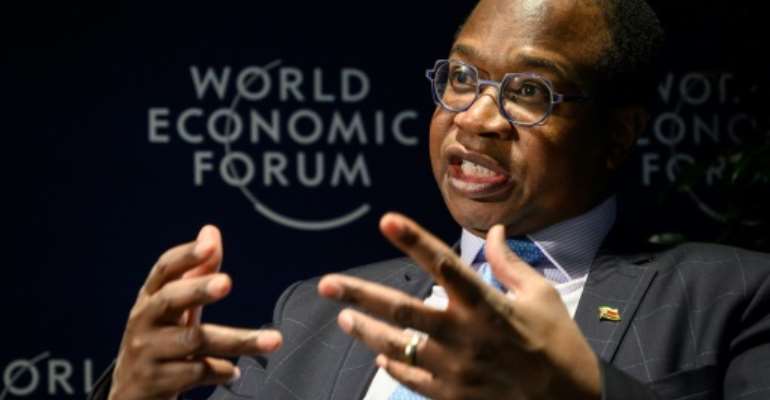 Zimbabwe Finance Minister Mthuli Ncube said that unrest in the country was "part of the pain" of reforms carried out by the government. By Fabrice COFFRINI (AFP)

"The economic reform agenda is a very serious one, but also we are determined to see it through," he said in an interview at the World Economic Forum in Davos.

"This (unrest) is part of the pain in terms of the reform roadmap," he said.

"The truth is we've had 20 years of economic decay and morass, and we're determined that we fix this and move Zimbabwe to the next level."

The southern African country has been rocked by deadly violence after the government hiked fuel prices as part of its hard-hitting reform plan, enacted following the ouster of longtime leader Robert Mugabe 14 months ago.

President Emmerson Mnangagwa was meant to be in Davos with Ncube but had to cut short his overseas tour amidst the clashes.

Earlier Tuesday Mnangagwa vowed to investigate security forces over their deadly crackdown on protesters, but said that raising fuel prices "was the right thing to do".

Civil society groups say at least 12 people have been killed in the crackdown and scores treated for gunshot injuries, as well as reporting hundreds of incidents of assault and torture.

About 700 people have been arrested, officials say.

"Zimbabwe is open for business," he insisted, after what he characterised as positive meetings with company representatives in Davos.

"There's incredible opportunities in Zimbabwe right now for privatisation," he said, after identifying 11 companies that are ripe for private-sector investment including mobile and fixed-line telecom firms, and banks owned by the state.

Ncube's rehabilitation plan includes currency reform after bouts of hyperinflation under Mugabe wiped out people's savings, and compensation for white farmers whose land was expropriated by the former regime.

Such measures would reassure investors of financial stability and the rule of law in Zimbabwe, the minister said.

Investment of $8.0 billion is expected over the next couple of years in mining alone, and "the fuel matter is only a small blip in the whole reform agenda", Ncube said.

"Investors understand that Zimbabwe is going through a temporary phase of economic strife, but this strife is needed as a way to make sure that the reforms are achieved.

"Investors get it so they're making long-term decisions, they're engaging with us."

Other countries in Africa and beyond have been turning to China for much-needed investment, although popular anger has been building over the debt incurred as the Asian giant flexes its international muscles.

In Zimbabwe's case, past contracts negotiated with China had been "fair" and new investment was welcome, provided the terms were reasonable and made transparent, Ncube said.