NAM1 Arrest: Tell Us What Really Transpired in Dubai – Ablakwa 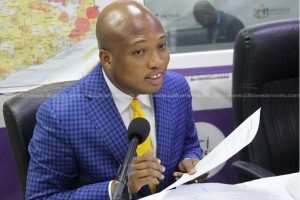 The Minority in Parliament is calling for a full disclosure of information on the recent trip by a government delegation to the United Arab Emirates, for the possible extradition of Menzgold Boss Nana Appiah Mensah.

According to the Minority Spokesperson on Foreign Affairs, Samuel Okudzeto Ablakwa, details such as which government officials from the emirati side met the country's delegation, the level of diplomatic discussions that took place between the two countries, and the role of the Ghana mission in the UAE in resolving the matters at hand, are all critical information that Ghanaians must know.

The MP for North Tongu argued that if the purpose of government's recent trip to Dubai was only to take a statement from NAM 1, then the Ghanaian Embassy in Dubai could have conveniently done that on behalf of the government.

Mr. Samuel Okudzeto Ablakwa also accused government of causing financial loss to the state by funding the recent trips by some EOCO and Ghana Police officials to the UAE to take a statement from NAM 1.

“Full disclosure is very important when you have told the whole country that you have composed a delegation and that you are going to meet your counterpart in Dubai and you are going to use diplomacy to try to get NAM 1 back to Ghana. As we speak, so many days since they return, no briefing to the Ghanaian public, we do not know which officials we met there…Remember that this is a country where we have a full mission, we have an Ambassador, Alhaji Ahmed Ramadan, and if it was just going to take a statement from NAM 1; the mission could have done that”.

“What you have engaged in now, leading a high level government delegation and returning and not telling us if you met your counterpart in UAE can only amount to causing financial loss and wastage of the tax payers monies.”

“Especially for a government that has said that they do not want to use the tax payer's monies in compensating the victims of this Menzgold debacle, the government's conduct leaves much to be desired. And we insist the people of Ghana need to know what really transpired in Dubai.”

Last week, a government delegation headed by Deputy Attorney General, Joseph Kpemka were in UAE for deliberations on the possible extradition of NAM 1.

The Ghana Police Service and the Economic and Organised Crime Office, in a statement revealed that the CEO of the troubled gold trading firm, Menzgold, Nana Appiah Mensah, is currently facing misdemeanour charges in Dubai, after which he will be brought to Ghana if he's cleared of all the charges leveled against him.

In the statement, the Ghanaian delegation revealed that NAM1’s court hearing in Dubai has been scheduled for February 2, 2019.

“It is the understanding of the Ghanaian delegation that Mr. Mensah faces misdemeanour charges in the UAE and will be made available to Ghana upon the final determination of his current matter in the UAE. His case is next due for court on February 2, 2019” the statement read.

According to the statement, the Menzgold CEO has been engaged by EOCO and the Ghana Police Service representatives in Dubai and has provided an extensive statement to the security agencies which will be used for investigations into claims of fraud leveled against him by Ghanaians who invested with Menzgold.

Hundreds of Ghanaians are unable to retrieve their investments in Menzgold, and some have gone to court to seek redress.

This was after Menzgold was asked by the Securities and Exchange Commission, SEC, to stop it's business because it was illegal. The company has since then struggled to pay clients, giving credence to suggestions that he was running a ponzi scheme.

There is an existing arrest warrant for NAM1, after it emerged that he had breached his bail conditions and fled the country. Although he's said to have been arrested in Dubai in the first week of December 2018, news of his arrest became known in early part of January 2019, after the warrant had been issued for him.

His arrest in Dubai is believed to be in connection with a gold deal in Dubai worth millions of dollars that has gone bad.