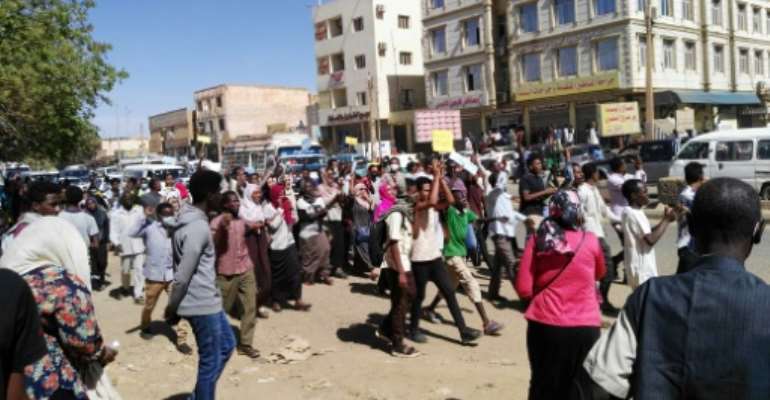 A protest in the Sudanese city of Omdurman on Sunday. By STRINGER (AFP/File)

Hundreds of people demonstrated in the Sudanese city of Omdurman on Monday after a protester died of wounds suffered at a anti-government rally last week, witnesses said.

Deadly protests have rocked Sudan for more than a month after the government decided to raise the price of bread.

The protests, which quickly turned into nationwide demonstrations calling for an end to President Omar al-Bashir's three decades of rule, have left 26 people dead so far, according to officials.

Rights group Amnesty International has put the death toll at more than 40.

Witnesses told AFP that late on Monday hundreds of people gathered in Omdurman, the twin city of the capital Khartoum across the Nile, as the body of a protester was brought from the hospital where he died.

"People are chanting freedom, freedom and overthrow, overthrow as they gathered for the funeral of the protester," said a witness.

A doctors' committee linked to the Sudanese Professionals Association (SPA) that is leading the nationwide demonstration confirmed the protester had died.

"He was wounded on Thursday, but today he died in hospital," the committee said in a statement.

A friend of the victim said he was attending the funeral along with hundreds of other people.

"I'm attending the funeral of my friend who was an engineer," he told AFP on condition of anonymity.

He added that the dead protester was wounded in the east Khartoum neighbourhood of Burri, which saw clashes between security forces and protesters on Thursday.

Police have confirmed that two other people died during the Burri clashes on Thursday.

One of the victims was a doctor, whose death was also reported by the doctors' committee.

About 150 doctors held a silent sit-in on Monday to protest the doctor's killing.

Carrying placards that read "killing a doctor means killing a nation," they stood in silence outside the Khartoum hospital where the doctor used to work, witnesses said.

Sarah Jackson, Amnesty's deputy director for East Africa, said it was an "outrage that Sudanese security forces continue to use lethal force on protesters and key service providers like doctors".

But Bashir rejected the accusations, saying at a rally on Sunday that the doctor was "killed by someone from among the demonstrators".

Although the protests began last month against the cutting of a vital bread subsidy, they come at as Sudan suffers from an economic crisis driven by an acute shortage of foreign currency and soaring inflation that has more than doubled the price of food and medicine.

The SPA has called for night-time demonstrations on Tuesday in Khartoum and Omdurman.

More rallies were also planned for Thursday "across all towns and cities of Sudan," the group announced last week.