JB Danquah Is Still on My Mind – Part 3 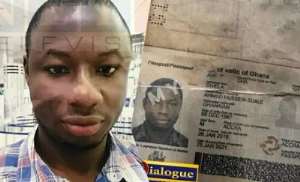 It is prejudicial or premature to call the fatal shooting of Mr. Ahmed Hussein-Suale an “assassination” because we don’t know yet whether the killing of the longtime associate of the renowned private investigator, namely, Mr. Anas Aremeyaw Anas, was politically motivated. And if it was politically motivated, who was the mastermind and for what reasons? (See “CID Opens Investigation[sic] into Ahmed’s Assassination” Modernghana.com 1/17/19). Already, some individuals and media establishments have jumped the gun by prematurely assuming that the New Patriotic Party’s Member of Parliament for Assin-Central, in the Central Region, may be behind the shooting death of Mr. Hussein-Suale, simply because Mr. Agyapong has engaged in a fierce battle with the Tiger-Eye (PI) team of private investigators of which the slain man was a prominent member.

Mr. Agyapong, who owns a chain of media enterprises, including radio and television stations, is alleged to have widely published photographs of the deceased and publicly called for Mr. Hussein-Suale to be severely and physically punished in exchange for a handsome monetary award to be given to anybody who decided to take Mr. Agyapong up on his admittedly incendiary words. The sole reason for his issuance of such incitement of violence against Mr. Hussein-Suale clearly appears to have been the fact of the latter’s having being a member of Tiger-Eye PI, a team of sleuths or professional investigators whose undercover activities, both inside and outside Ghana, led to the ruination of the careers of a remarkable number of socially influential, rich and powerful people, among them judges and sports administrators, including, most recently, the President of the Ghana Football Association (GFA), Mr. Kwasi Nyantakyi, and the dissolution of the Board of Directors of the GFA.

Indeed, so powerful and influential did Tiger-Eye PI, owned and operated by legally trained Mr. Anas Aremeyaw Anas, become that the most significant detective and investigative work that ought to have been routinely assigned to members of the Criminal Investigations Department (CID) of the Ghana Police Service (GPS) was regularly assigned by previous National Democratic Congress’ regimes, in particular the government of former President John Dramani Mahama, to the Tiger-Eye PI team. In the process, the institution of the Ghana Police Service came to be publicly envisaged to be redundant, otiose and effete. In other words, the GPS was perceived by many an ordinary Ghanaian citizen to be as good as nonexistent. The preceding state of affairs is what clearly complicates any futile attempt by police investigators to home in on such obviously circumstantial targets as Mr. Kennedy Ohene Agyapong.

To be certain, the moment that he publicly and widely published photographs of Mr. Hussein-Suale and called on any volunteers to physically assault the slain man, for a handsome reward, was when Mr. Agyapong ought to have been promptly arrested and charged with the felonious crime of incitement to hatred and violence as well. You see, while the NET 2 TV and Oman-FM Radio station owner may not have necessarily contracted the murder of Mr. Hussein-Suale, nevertheless, it is quite obvious that as a rich and powerful politician and businessman, Mr. Agyapong had a considerable clout, following and popularity in Ghanaian society enough to have directly or obliquely influenced somebody or a group of individuals to act upon his public expression of animus for Mr. Hussein-Suale and his associates.

Nevertheless, where I have my doubts verges on widespread allegation, at least as narrated by Mr. Agyapong, that at the time of his Mafia-style execution by some two unidentified gunmen on motorbikes, Mr. Hussein-Suale had had a falling out with his longtime professional associate and colleague, Mr. Anas Aremeyaw Anas. It is extremely important for police investigators to critically examine this aspect of the relationship between Messrs. Anas and Hussein-Suale. The remaining members of the Tiger-Eye PI team could very well be called upon by the GPS’s investigators to assist with tracking down the two allegedly unidentified gunmen on motorbikes who shot into the vehicle being driven by the slain man in the Madina area of northeastern Accra.

What I am trying to suggest here is that practically everybody who has had any dealings in any shape or form with Mr. Hussein-Suale and the Tiger-Eye PI firm can be presumed to be a potential suspect. We also hope that the most scientifically sophisticated technology vis-à-vis ballistics and DNA evidence will not be left out of the proverbial equation. I would, personally, be more confident and comfortable if expert investigators could be promptly invited from countries with greater expertise and experience in this type of crime to assist their Ghanaian counterparts.