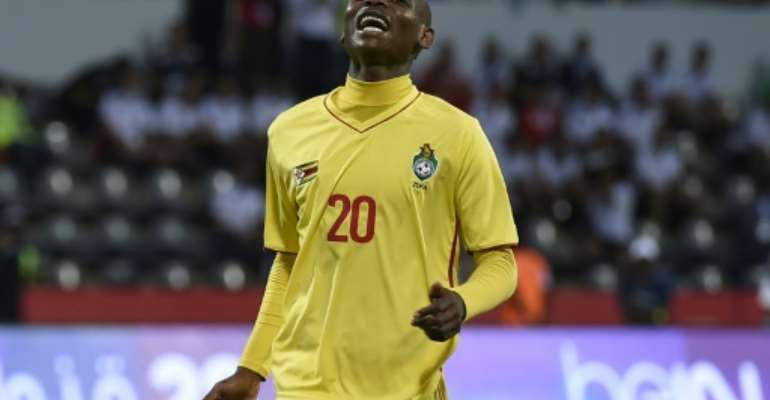 Zimbabwe striker Khama Billiat will be a key figure for South African club Kaizer Chiefs in a CAF Confederation Cup play-off against Zesco United of Zambia in Soweto this Saturday. By KHALED DESOUKI (AFP)

Kaizer Chiefs must overcome a 3-1 first-leg deficit this weekend to become the third South African club in four seasons to eliminate Zambian outfit Zesco United from a CAF competition.

Mamelodi Sundowns achieved the feat in 2016 and SuperSport United the following season, and Chiefs' German coach Ernst Middendorp believes the Soweto side can complete a hat-trick.

"What we need this Saturday is a big crowd roaring us on while the team must be more clinical in the final third than they were in Zambia last weekend," he said.

Fitness could also be a major factor in the Confederation Cup play-off second leg at Soccer City stadium in Soweto with Chiefs playing their fifth match in 15 days in all competitions.

AFP Sport puts the spotlight on Chiefs and four other teams hoping to overcome first-leg losses in the African equivalent of the UEFA Europa League.

Chiefs must succeed where many South African clubs fail in CAF competitions -- score at least twice under pressure while keeping a clean sheet.

Zimbabwean Khama Billiat netted in Zambia, his fourth of the campaign, and is likely to pose the biggest threat to Zesco goalkeeper Jacob Banda.

Zesco want an 'away' goal to cancel the one conceded in Ndola and have proven sharpshooters in Lazarous Kambole and Kenyan Jesse Were.

The Algerians, who snatched a stoppage-time victory in the previous round, lost 1-0 away to Libyans Al Ahly Benghazi after conceding four minutes into additional time.

Hussein hope inspirational captain Ahmed Gasmi can add to his three goals in Africa this season as they seek a first group appearance.

Benghazi have been poor travellers, suffering a 4-0 CAF Champions League thrashing from Mamelodi Sundowns in South Africa before dropping to the Confederation Cup.

They stunned Vital'0 4-1 in Burundi with Junior Ngongang netting four times after a goalless first leg, then edged Libyans Al Ahly Tripoli on away goals after a 1-1 draw on the road.

Gor will miss defenders Joash Onyango and Haron Shakava, banned for verbally abusing the referee and kicking the opposing goalkeeper respectively, in a previous CAF match.

Moroccans Renaissance Berkane reached the 2018 Confederation Cup quarter-finals before bowing out to eventual runners-up V Club from the Democratic Republic of Congo.

After home and away wins over Libyans Al Ittihad last month they came unstuck in Senegal, losing 2-0 to ASC Jaraaf, who played a third of the match a man short due to a red card.

Jaraaf were beaten by another Moroccan club, Wydad Casablanca, in the Champions League this season, leading to demotion to the secondary competition.

Salitas qualified for Africa after only one season of Burkina Faso top-flight football and Libyans Al Nasr stand between them and a group place.

Nasr won the first leg 1-0 through an Ibrahim Mohamed goal in Cairo, the temporary base of the Benghazi outfit as post Moamer Kadhafi era violence prevents them playing at home.

Ouagadougou-based Salitas are an academy club and hope to become the first representatives of Burkina Faso to reach the group phase in a CAF competition.