Sudan: Bashir dismisses protests as demonstrators push to keep up the pressure 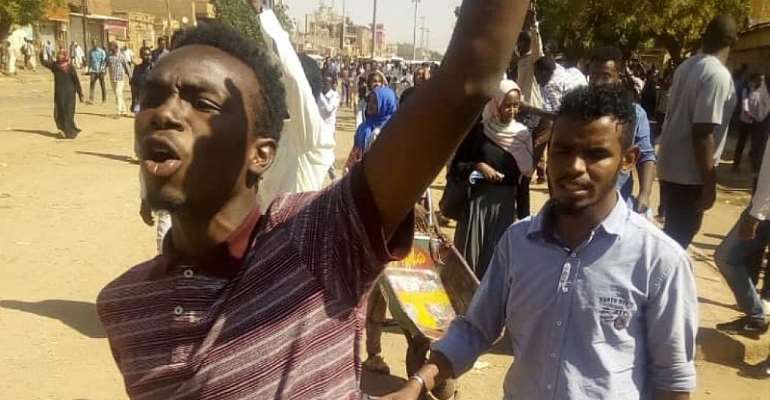 Sudan's President Omar al-Bashir vowed on Monday to stay in power despite ongoing protests calling for his departure. Demonstrators took to the streets of several Sudanese cities on Sunday as security forces responded with teargas while more protests are expected on Tuesday in the capital Khartoum and neighbouring Omdurman.

“Demonstrations will not change the government,” Bashir told supporters during a rally in Nyala, the capital of South Darfur state, according to reports from the AFP news agency citing state television.

“The Sudanese people will decide in 2020 who will govern them,” said Bashir, referring to elections next year in which he plans to stand for a third term as president. “There's only one road to power and that is through the ballot box.”

The demonstrations over the past three weeks were originally focused on living standards and the price of bread. However, protests have now morphed into a more general anger directed at Bashir and the ruling National Congress Party (NCP).

“Bashir doesn't understand that the game's over for him and his party,” Amjed Farid, a spokesperson for the Sudan Change Now activist movement, told RFI. “He cannot rule Sudan anymore, the man is history now.”

More than 40 people have been killed in a deadly crackdown on demonstrations since 19 December, according to rights group Amnesty International. Although Farid from Sudan Change Now said the death toll has exceeded 55 people.

Sunday's protests were not met with the same level of deadly force, according to Amnesty researcher Ahmed Elzobier. “The government has scaled down the use of lethal force,” he told RFI, referring to increasing attention on social media, reporting from the international media as well as statements from the UN, European Union and human rights organisations.

Nevertheless, Elzobier said he is concerned about reports of an armed militia linked to the ruling NCP cracking down on protesters. He said the militia wore masks and were using vehicles without number plates to avoid identification.

The Amnesty researcher also said hospitals are being targeted as part of the crackdown with members of the security forces pursuing injured protesters, and doctors, who try to protect their patients, also being detained.

“Security forces tried to arrest those who were injured and they tried to take them to a different hospital to hide the evidence,” said Elzobier, talking about teargas fired inside a hospital in Khartoum North district and a similar incident in Nyala, Darfur.

Activist Farid said the number of arrests is more than 2,000, considerably higher than 816 people, as stated by the Sudanese Interior Minister Ahmed Bilal Osman on 7 January.

“Sudan Change Now and other political entities, we say the number is around 2,000 across the different cities of Sudan and this estimate was from last week,” said Farid, speaking from outside the country.

Amnesty uses a more conservative figure, putting the number of arrests at more than 1,000, according to Elzobier. “Every day we receive from 20 to 40 names of people from different parts of the country,” he said in a telephone interview.

The Amnesty researcher characterises the protests as “peaceful” using slogans that “preach peace”, although he noted some isolated instances of stone-throwing at security forces.

The Sudan Change Now spokesperson said Tuesday's demonstrations are expected to be big following the call from the Sudanese Professionals' Association, who have been spearheading the rallies. Farid describes the demonstrations as “very organised” with a schedule and breaks in between protest days.

“The revolution that's on the streets of Khartoum is very focused and has a very clear vision that people are fed up with the mismanagement and the political corruption that led to this economic crisis,” he said.