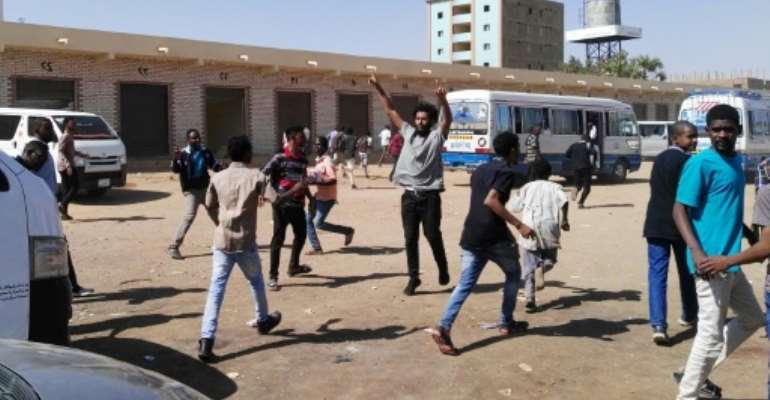 Sudanese protest in the streets of the capital Khartoum on January 13, 2019. By STRINGER (AFP)

The demonstrations in Darfur were the first of their kind since unrest erupted on December 19 over a government decision to triple the price of bread.

The protests have since swiftly escalated into nationwide rallies widely seen as the biggest threat to Bashir's rule in his three decades in power.

Protesters who took to the streets in the capital's Bahari district chanting "peace, peace" and "revolution is the people's choice" were quickly confronted by riot police, witnesses told AFP.

Authorities say the protests have left 24 people dead so far, while Human Rights Watch has put the death toll at 40, including children and medical staff.

The European Union said on Friday that security forces have used "live ammunition" against protesters causing casualties, although Sudanese officials including Bashir have blamed the violence on "thugs" and "conspirators".

Protest organisers have called for near daily demonstrations across the country against Bashir this week, calling it a "Week of Uprising".

In Khartoum on Sunday protesters were seen carrying the Sudanese flag as others held banners bearing the words "peace, justice, freedom", which has become a key slogan in the rallies.

Witnesses told AFP that police were pursuing protesters down Bahari's streets and alleys.

"It's like a cat and mouse game," a witness said.

Many of the protesters were women who wore masks to protect themselves from tear gas as they whistled and clapped in the streets of Bahari, the hub of Sunday's demonstration, witnesses said.

Some residents in Bahari took protesters inside their homes and offered them juice as tear gas canisters stuck the facades of their buildings, a witness said.

Police dispersed the rally later on Sunday, but the smell of tear gas lingered across the neighbourhood, witnesses said.

Several streets remained blocked with burnt tyres and rocks thrown by protesters, a witness said, adding that riot police, some in vehicles loaded with machineguns, remained deployed in the area.

Protests broke out in Darfur after calls for rallies there by the Sudanese Professionals' Association, which has spearheaded the demonstrations. 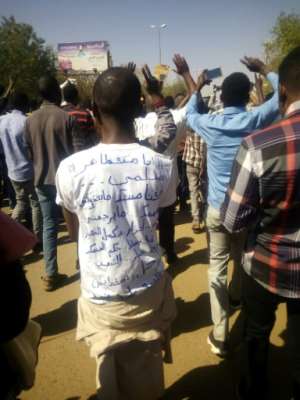 Darfur, a region the size of France, has been torn by violence since 2003 when ethnic minority rebels took up arms against Khartoum, accusing it of economic and political marginalisation.

Bashir, who seized power in an Islamist-backed coup in 1989, has been charged by the Hague-based International Criminal Court (ICC) with genocide and war crimes allegedly committed in Darfur.

Protests were also reported in the central town of Madani and in some villages of the eastern impoverished, agricultural province of Gadaref.

Rights groups say more than 1,000 people have been arrested since the protests began, including opposition leaders, activists and journalists as well as demonstrators.

The crackdown has drawn international criticism, with countries like Britain, Norway, Canada and the United States warning Khartoum that its actions could "have an impact" on its relations with their governments.

Although the unrest was triggered by the rise in the price of bread, Sudan has faced a mounting economic crisis over the past year, led by an acute shortage of foreign currency.

Repeated shortages of food and fuel have been reported in several cities, including Khartoum, while the cost of food and medicine has more than doubled.

Bashir and other officials have blamed Washington for Sudan's economic woes.

The US imposed a trade embargo on Khartoum in 1997 that was lifted only in October 2017. It restricted Sudan from conducting international business and financial transactions.

But critics of Bashir say his government's mismanagement of key sectors and its huge spending on fighting ethnic minority rebellions in Darfur and areas near the South Sudan border have been stoking economic trouble for years.