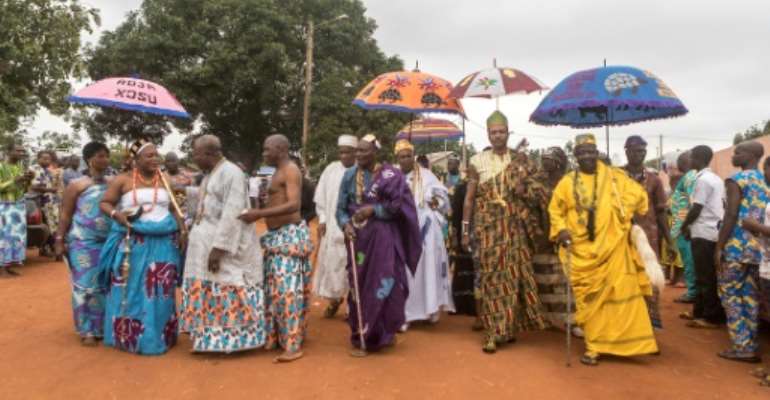 Kings from various districts of Abomey, Benin, arrive for the funeral of Dah Dedjalagni Agoli-Agbo, monarch of the former military kingdom of Dahomey on August 11, 2018. By YANICK FOLLY (AFP/File)

A new ruler of the former military kingdom of Dahomey in modern-day Benin was designated on Saturday, after the death of the previous monarch, last year.

Modern-day kings of Dahomey have no formal powers under Benin's constitution but retain much ceremonial, political and economic influence.

"The night was long but a new dawn has broken on the kingdom of Dahomey," they said.

One of those involved said the nomination was "happy and consensual" and that Glele was a worthy successor to Agoli-Agbo, a former police officer who had 41 wives.

The kingdom of Dahomey existed for nearly 400 years until its last ruling king, Behanzin, was defeated by the French in 1894.

The country then became part of French West Africa.

Dahomey was a major regional power built on conquest and the slave trade but also fostered major works of art and had an all-female military unit the French called the "Amazons of Dahomey".